Alert Gazette readers will recall that only two days ago, I predicted that the juvenile red-shouldered hawks next door would be leaving the nest “within the next couple of weeks.” Well, we discovered today that my prediction was off by only…well…a couple of weeks.

I walked outside early this morning in time to see one of the youngsters glide from the nesting tree, across the vacant lot, and land in a tree about a hundred feet away. A white-tailed doe was grazing below and the hawk seemed to be fixated on it, as it hopped from branch to branch following the deer. The doe was obviously much too large to be prey, but it was still an object of apparent curiosity. The hawk eventually disappeared from sight into the the thick stand of live oaks bordering the golf course.

Turning my attention back to the tree with the nest, the other two juveniles were resting on branches near their previous home. The nest itself looked tattered, just a haphazard mass of twigs, half of which was now hanging from a branch below the original location. As I told someone later, imagine what your house might look like if you left three teenagers alone in it for a period of time (no offense to the young hawks, of course). However, Debbie and I also wondered if the adults had destroyed the nest as a not-so-subtle hint to the kids that it was time to move on. 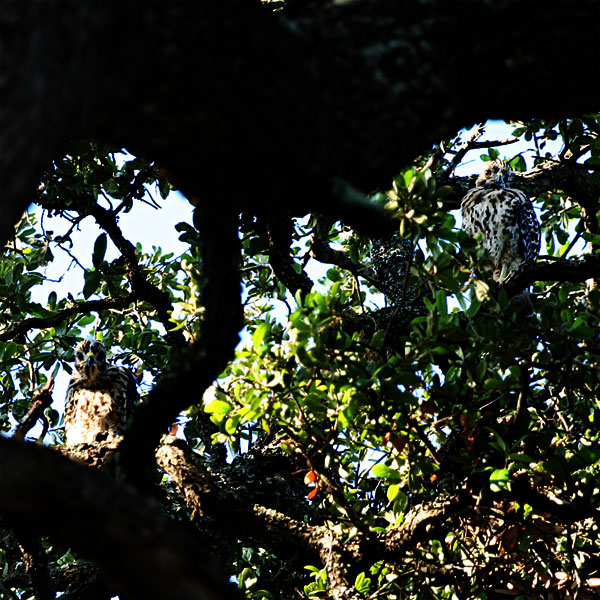 These two appear ready to follow their sibling’s example by setting out on their own.

Late this afternoon, only one juvenile remained in the tree. As I mentioned in the previous post, the hawk’s eggs don’t hatch simultaneously, so the three siblings won’t necessarily be at the same stage of development at any given time. But they seem to  mature very rapidly and those differences don’t have any significant impact.

It’s been a fascinating process to observe, from a mother incubating eggs, to newborn nestlings, and from “teenaged” fledglings to young hawks ready to strike out on their own. I’m sure we’ll spot them in the skies from time-to-time, and perhaps a couple will return to build another nest and restart the cycle.