It’s been an interesting week or two around Casa Fire Ant, as we’ve had the opportunity to observe some rather unique natural phenomena without getting very far from home. Or, without even getting out of the house.

Let’s start with that last thing, how about? I was sitting in the office working on some complex differential equations watching cat videos when Debbie called to me from the living room in a rather excited voice…you need to come see this! “This” turned out to be this: 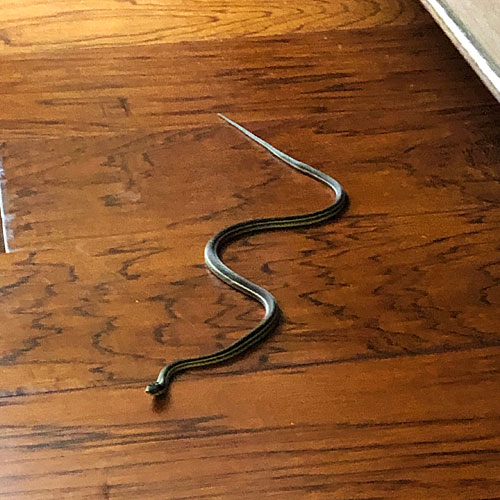 Hard to know who was more surprised, the snake or us

Well. We’ve had numerous uninvited guests in our house since we moved here three years ago, including a Texas spiny lizard (guest bathroom), a green tree frog (2nd master bathroom), a six-inch-long centipede (kitchen), and numerous geckos and scorpions (pretty much everywhere). We’re accustomed to inspecting our floors every morning when we first get out of bed, a natural function of living on a creek in a wooded area. But this raised the intrusive varmint factor to a new level; the first time (that we know of) that a serpent has entered our happy home.

It’s a western ribbonsnake (Thamnophis proximus), a nonvenomous species of garter snake. It’s hard to get a sense of scale from the photo but it was about fifteen inches long. We think it might have come inside to escape the horrible heat of the day, but the joke was on him as our a/c was out at the time. (Compared to having no a/c in July in Texas, a snake in the house is almost a pleasant diversion. Almost.)

I kept an eye on the intruder while Debbie found a small box. She wielded a broom and coaxed the snake into the box, which sounds easier than it was, as it had its own ideas about where it wanted to go. But we eventually captured it and I took it into the vacant lot next door for release with a stern warning not to return. 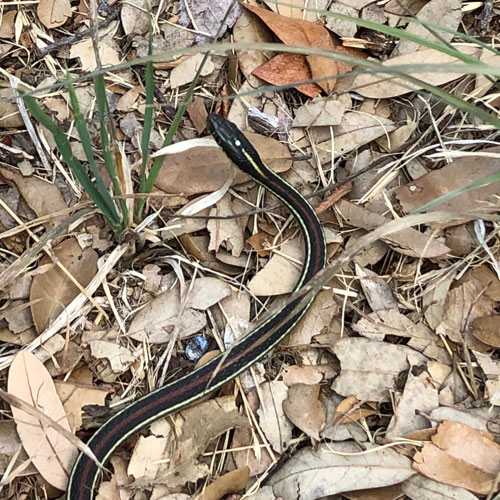 That white dot on the head is the distinguishing mark for this species.

Neither of us could identify the snake so Debbie posted the top photo to the Central Texas Snake ID group on Facebook, which is an absolutely invaluable resource for anyone wondering about what kind of snake is on their dining room floor (or anywhere else). It’s a moderated group run by a collection of snake experts who not only identify snakes but also educate us about their habits.

That resource came in handy again just a few days later when Debbie once again sighted a snake…but this time it was properly wandering in our back yard and not inside our house. It was a quick little fellow, but I was quicker. He was an absolute beast but I managed to wrestle him into submission: 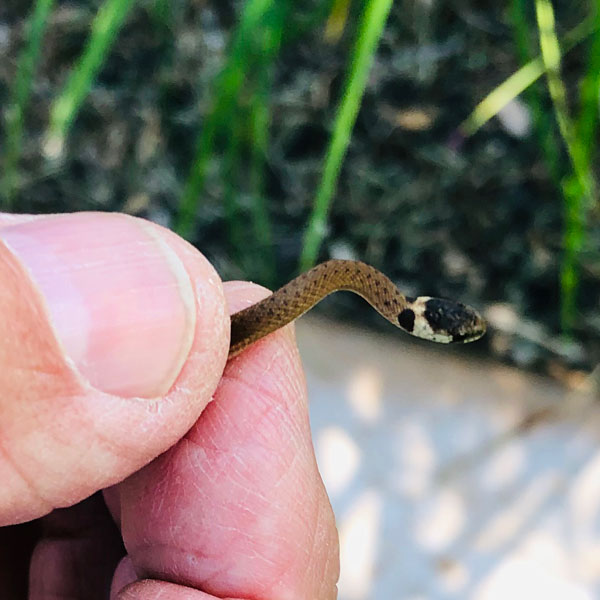 This pretty little guy is a juvenile DeKay’s brown snake (Storer decay), another harmless species. They primarily eat slugs, snails, and earthworms. Again, we had to turn to the aforementioned Facebook group for an identification (and, incidentally, the photo elicited a number of “oooh, how cute!” comments from the many female snake lovers in the group). And, as before, I simply released it back into the grass after the photo session. We’re more than happy for it to eat all the snails and slugs it can find.

Our third encounter with nature didn’t involve snakes, but skunks rank right up there in a list of Things You Don’t Want To Spend Much Time With.

We have a lot of skunks in and around our neighborhood. Often, when we head out for a run around sunrise, we have to alter our pace or route to avoid a skunk (or two…or three) staggering back home after a night of wild partying. But it was an evening encounter that continues to fascinate and puzzle us.

We were driving back into the neighborhood around dusk when we spotted movement a few yards out in the vacant lot just inside the gate. We immediately pegged it as a skunk, but as we drew closer alongside of the subject, our conversation went something like this:

A big chunk of spunky skunks

No, wait…there’s THREE of them…

Uh, there’s another one!

Are you kidding me?! FIVE skunks?!

What we were witnessing was something I can only describe as a tightly knit swirling group of skunks, two adults and three young ones. One of the adults eventually broke away from the group and headed into the pasture while the remaining group of four stayed packed together and followed its lead.

We assume that we were seeing a defensive maneuver designed to protect the youngsters, in reaction to the presence of our vehicle. I haven’t been able to confirm this despite my extensive efforts at research, i.e. a couple of google searches, but I’m going with that explanation until someone tells me differently.

The light was fading fast and our iPhone cameras are notoriously inept in low light, but in spite of the poor quality, the above gif might give you a idea of what was going on. Trust me, there are four skunks in that group.

So, pretty exciting, huh? Our motto around here has now become, “what now?”

Uh, I better go…I think I hear a howl coming from the hall closet…