I celebrated a monumental event last week. It wasn’t my wedding anniversary, nor my wife’s birthday, although those things did take place…but they do pretty much every year. No, this was something that happens only very rarely: I paid off my iPhone.

I had been anticipating this blessed occurrence for a few months, but that anticipation didn’t lessen the sheer joy of opening the monthly emailed bill from AT&T and seeing a significant reduction vs. the previous 24 months. I basked in the glow of that reduced payment for almost a full day…and then the phone broke. 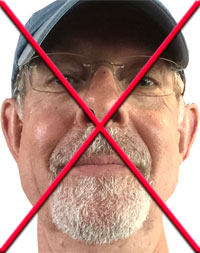 I’ve been canceled by my own phone.

To be more specific, Face ID on my iPhone X stopped working, meaning that I have to enter a code EVERY. STINKIN’. TIME. I want to use the phone for anything other than a camera or the world’s most expensive weak flashlight.

If you have an iPhone without Face ID, you can’t possibly relate to the amount of angst and anger this situation engenders. For one thing, unless you have a phone older than seven years, you have fingerprint recognition, aka Touch ID. But when the geniuses at Apple decided to implement Face ID, they deleted the Touch ID capability, so one has Jetson technology while Face ID works, and Flintstones tech when it no longer does.

And it’s not just phone access either; many apps allow the use of Face ID to bypass passwords, thereby allowing easier use of strong passwords. That’s really cool, until you have to type a 20-character password to open an app instead of just staring at it. (Yes, I do use a password manager — I’m not an animal — but guess how you get into the password manager in order to copy the password in order to use the app…ad nauseum.)

The loss of Face ID on an iPhone is sufficiently common that there are websites that help you diagnose which of the three parts that make up the capability may have malfunctioned and rendered it inoperable. I particularly liked this one, because I was able to replicate the three required tests and diagnose the issue. The website even provides the solution, and I quote: “…the problem cannot be fixed.” Those may be the five saddest words in the English language, although “the margarita machine is broken” runs a close second.

It turns out that — according to the website — my phone’s dot projector filed for unemployment and then quickly qualified for disability. What’s a dot projector? you may ask. Heck if I know, but these guys do. According to them, and I have no reason to doubt their expertise, the dot projector does just what the name says: using high-intensity LED lights, it projects 29,929 dots onto your face, thereby giving the tiny nerd wizards that live inside your phone the data needed to build a mathematical model of your lovely visage. (It’s worth noting an unsubstantiated rumor has it that Apple first tried using lasers but quickly gave up the idea when they realized that face-melting wasn’t just an adjective applied to heavy metal music.)

The use of lights is a brilliant approach (see what I did there?) because it lets the phone recognize you in the dark. Also, since math is hard, nobody else can solve your individual equation which is the main reason a photo of Brad Pitt would never successfully unlock my phone…not that I ever tried. As far as you know.

Anyway, the whole shebang is pretty cool, as long as it works. But I apparently bought the special Blade Runner Replicant edition of iPhone with the automatic Face ID countdown timer designed to coincide with the final payment on the phone.

Now, all of us who are on Facebook and/or Twitter know that there really aren’t any problems that can’t be fixed other than stupid. For example, I could just jack up this phone and run a new one under it. Voila! Fixed! And, frankly, this is a semi-possibly-potentially attractive option. However, it is rumored that the next generation of Replicants iPhones will feature both Face AND Touch ID and while having both features will no doubt inexplicably introduce exponentially more things that can go wrong, surely I can be patient long enough to give them a try. I’d really like to savor a few more months of lower phone bills.

I do take a small measure of consolation from the fact that nowadays, wearing a mask defeats Face ID anyway. But with my luck, the pandemic will end next week and I’ll be the only one who has to type in unlock codes and passwords. Bummer.