Happy Friday, folks! We’ve got a lot of ground to cover today so try to keep up. (Just kidding. If you’re here for the pictures, there’s plenty; if you’re a former Playboy reader and have just stopped by for the articles, there’re a few things for you, as well, but none of it requires your rapt attention.)

First, please join me in congratulating the 80th guest at the Fire Ant Armadillo Lodge: 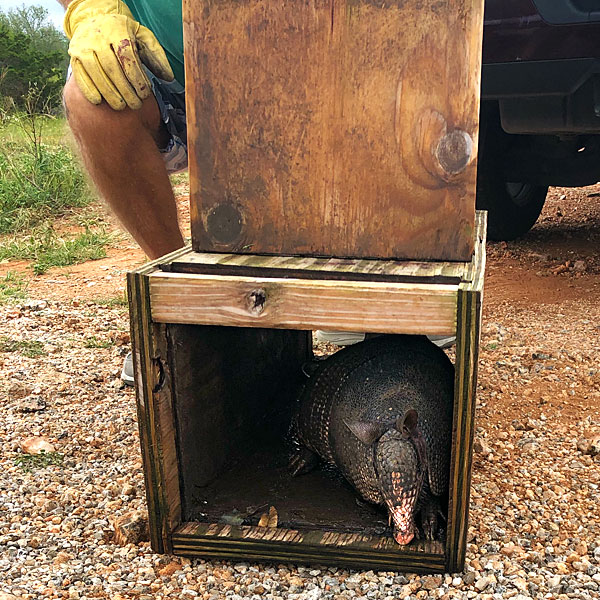 Armadillo Ochenta — as he prefers to be called — won a fabulous prize of an extended vacation in an undisclosed location somewhere between Austin and San Angelo. Enjoy, #80, and feel free not to visit again!

We’ve recently had a number of interesting visitors besides #80. Yesterday afternoon Debbie glanced toward the back patio and exclaimed “what’s that?!” I followed her pointing finger and saw that she wasn’t looking outside at all, but rather at the track of our sliding glass door. This little fellow was attempting, and failing, to look inconspicuous.

I grabbed him, carefully trying not to break his tail, and he responded to my gentle grasp with a gaping maw that informed me that he was ready and able to inflict significant mayhem on anyone and anything within snapping distance. He, too, was released on his own recognizance to one of our flowerbeds. 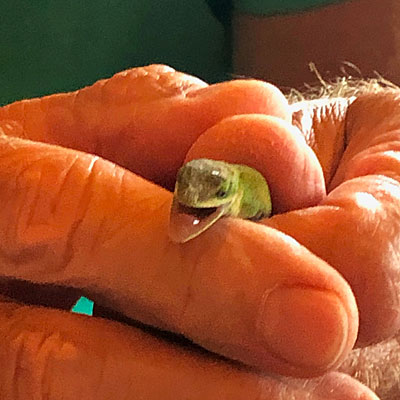 Anole in hand is the same as in a bush, only more comical.

And, no…it’s not a snake. It’s a green anole. So cool your jets.

Not all our visitors are as harmless or comical. I watched this one stroll around the grounds until he felt at home.* 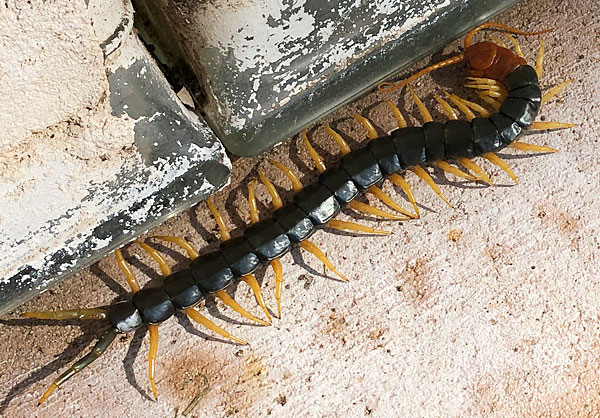 I count only twenty-one pairs of legs. So, more arthropodic braggadocio.

This is a Giant Redheaded centipede, aka a Texas Redheaded centipede (not to be confused with the Texas Red Headed Stranger). This one was about six or seven inches long (I tried unsuccessfully to get it to stand still for an exact measurement; it had a bad case of jimmy legs).

Centipedes are horrifying to look at and, yes, they are slightly venomous. But they do fill an ecological niche by eating other insects and even snakes. That’s all well and good as long as they stay outside. Unfortunately, they don’t always respect our boundaries.

Let’s shift gears to something a little more cuddly. Alert Gazette readers will recall that we are regularly visited by tree frogs. In fact, almost every morning we find two of them hidden beneath the cushions of the chaise loungers on the back deck, and they spend the day there. And every evening, they leave to do whatever nocturnal amphibians do when the sun goes down.

Occasionally, though, we’ll find them in different spots — invariably cool and shady spots — during the day. Here’s one that was resting in the foliage of a potted bell pepper plant on the deck. 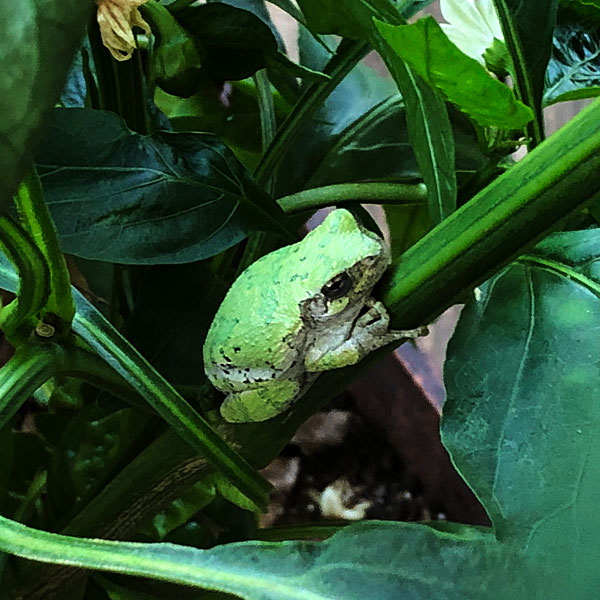 Move along. I’m not the droid you’re looking for.

But enough of the Animalia kingdom; let’s talk fungi.

I was roaming around the adjacent vacant lot, wearing snake boots and carrying a weedeater, much to the bafflement of the golfers across the fence, and came upon this scene: 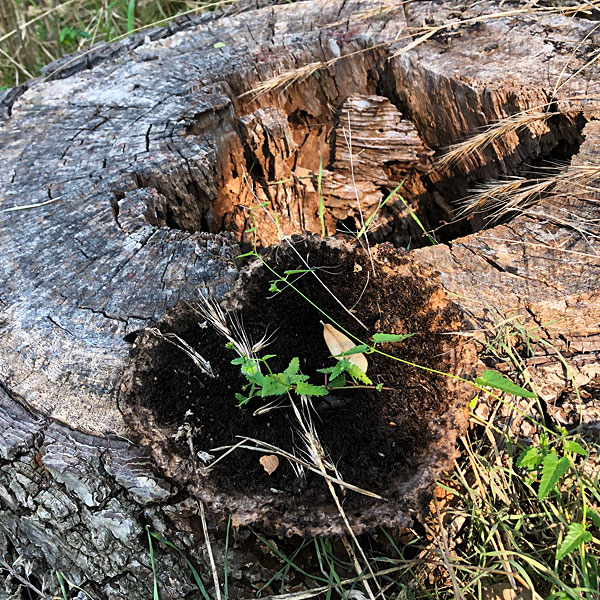 A pyramid scheme of life

I realize this isn’t all that interesting at first glance…and possibly not at second or third glance. But work with me here. There’s a big, dead, partially rotted tree stump lodged in the ground. And on that stump is a tree fungus (bottom center in the photo), somehow finding nourishment in that woody corpse. But — and here’s what I found rather fascinating — in the center of that fungus there are green leafy plants taking root. I don’t know what kind of plants they are, but wouldn’t it be cool if they’re baby trees? Talk about the circle of life.

Well, I can see you don’t share my enthusiasm for symbiotic relationships among flora living and dead. That’s fine. But what about a mushroom that looks like a flower? Is that more to your liking?

Of course, anything worth posting is worth Photoshopping, and while this mushroom has an interesting shape, I feel it’s a bit lacking in the coloring department. So, I’ve “helped” it along. Drag that vertical yellow bar to the left to see what I mean. 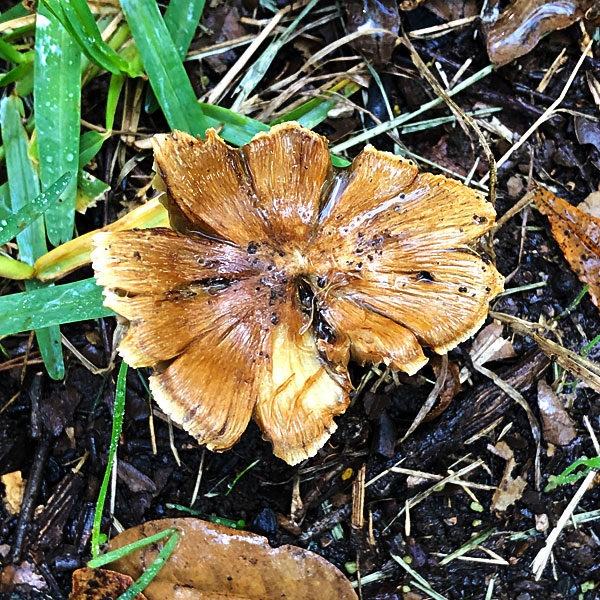 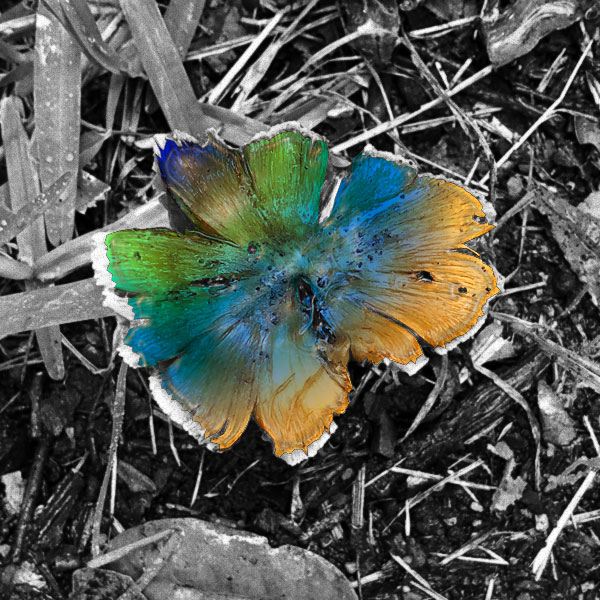 Drag that yellow line. You know you want to.

Up next: some raccoon photos, and perhaps a beaver video. Stay tuned!

*Sounds familiar, doesn’t it? Feel free to hum the song from which this lyrical phrase comes.