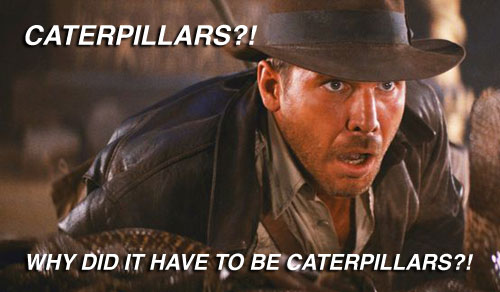 Alert Gazette readers will recall my lament from last spring regarding an infestation of walnut caterpillars and their fecal flotsam. Well…lucky us. It turns out that these creatures make twice annual appearances — spring AND fall — and we’re now in the middle of their curtain call.

This is also the time of year that the pecan trees begin to drop their leaves, so we’re dealing not only with caterpillar poop falling onto our deck from the trees in our back yard, but also the leaves. My mid-morning ritual now consists of firing up the leaf blower in an attempt to bring a modicum of order to the deck and back porch. Of course, those efforts yield results that last at best a half hour or so, but, like Sisyphus pushing that rock, my fate is simply to keep trying.

Now, all of this is annoying enough, but this is also the time of year when the walnut caterpillars launch themselves from the tree and rain down like multi-legged storm troopers. In the past, we’ve tried (a) ignoring them, (b) sweeping them, and (c) squishing them. The first approach proved unworkable, the second was futile, and the third was gross. So, this time around I’ve initiated Option D: harvesting them.

I haven’t figured out their life cycle or behavioral patterns. I mean, they drop out of the trees, but then immediately find the nearest wall and start climbing back up again. I don’t know; maybe it’s like an amusement park ride to them. But it’s a somewhat unsettling thing to stand on the back porch to watch — and hear…they make a faint but obvious plop when they hit — them fall. They seem to be slightly stunned when they hit the deck, but quickly recover and start crawling around.

Anyway, I’m collecting caterpillars by the bucket, and the creepiness factor increases when you look into said bucket. The following scene brings to mind the phobia of Indiana Jones:

They could be really short snakes.

As with most things, this too shall pass. At least walnut caterpillars don’t transmit COVID-19.