This is the time of year when turtles start trekking across the countryside in search of the perfect spot in which to start a family. In other words, they dig a nest and lay eggs. I’ve covered this phenomenon before here on the Gazette, but it seems that Nature throws a curve ball just when you least expect it.

About a week ago, I noticed a large turtle in the vacant lot adjacent to our house. That lot has been the site of many turtle nests through the years, and I immediately recognized the drill.

The female turtle digs a hole with her hind legs, creates mud in a process which we’ll leave to your imagination, lays eggs and positions them (a euphemism for “cramming them down into the mud”) with her hind feet. 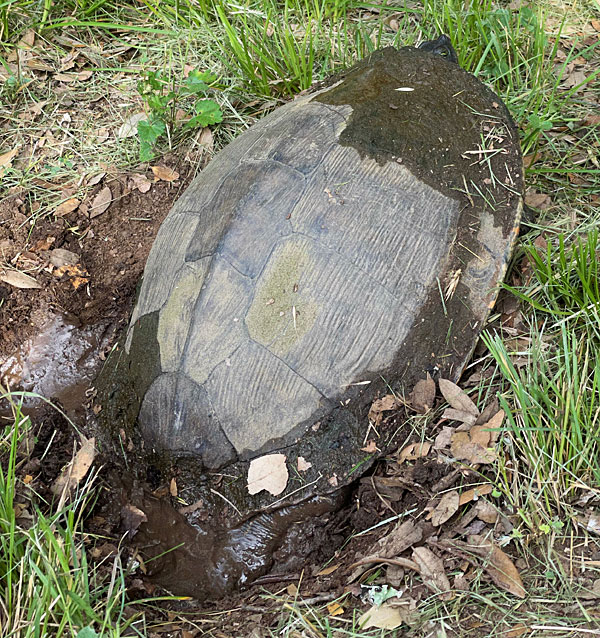 This is either a river cooter or a mud turtle. I confess my ignorance.

Once she’s finished depositing the eggs — a process that can take an hour or more — she covers the nest and attempts to restore the ground to its original state, again using her back legs. This process of concealment is remarkably effective. 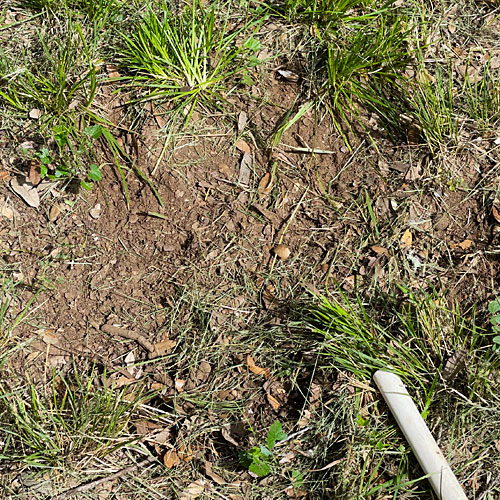 I placed a length of PVC pipe close to the nest so that I could locate it again.
That’s how well the turtle’s restoration works.

Unfortunately for the turtles, the surface concealment doesn’t protect the nest from predators who rely on their sense of smell for detection of food sources. The eggs often fall prey to raccoons and armadillos. In fact, there was a disturbed nest a few yards away littered with shards of egg shells, evidence of a recent raid.

Those predators are efficient hunters. My pal Scott, who lives a mile or two away, told me that he observed a red-eared slider laying eggs a few weeks ago. He intended to try to protect the nest, but wasn’t able to do so immediately. That same evening, the nest was raided and the eggs consumed. So, the lesson to be learned is that immediate protection is important.

The suggested method for protecting a nest is to put a wire cage over it…something that will prevent predators from digging it up, but will still allow the hatchlings to escape three or four months down the road. I’m planning to do that, but in the meantime, I’ve covered the nest with a couple of boards weighted with glass blocks. 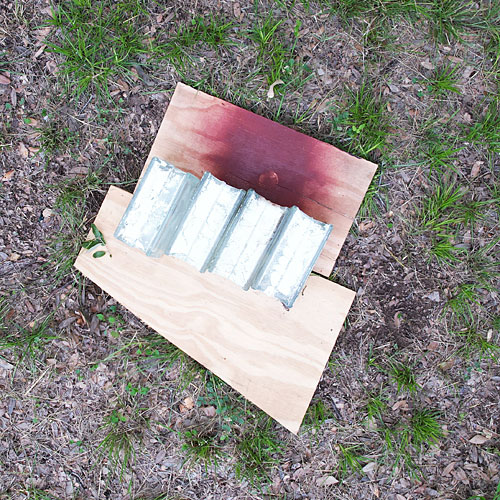 A drone’s eye view of the covered nest.

The story doesn’t end there, however. An hour or so later I noticed the turtle moving back toward the creek behind our house, where she presumably resides when she’s not laying eggs. I walked over to get one last photo to complete the documentation, and that’s when a delightfully surprising scene began. For once, I had the presence of mind to start recording, and here’s the resulting video.

The two young armadillos appear to be the remaining pair of quadruplets that I introduced a few weeks ago. This is not the first time we’ve seen a pair of youngsters foraging in this same area during daylight hours, and it could be that all four of them are still around and we’re just seeing them in pairs.

In any event, it was very cool to witness the interaction between the two species. Forget Alien vs. Predator; I rather see Turtle vs. Armadillo any day.