It’s springtime and love is in the air. Also mosquitos, but that’s not what we’re talking about today. What we are talking about is the appearance of babies of various non-human species.

We’ve been monitoring the progress of the red-shouldered hawk nestling that’s in a live oak tree down the street from our house. I launched the drone yesterday to check in on the little guy, and the change from last week is pretty dramatic. He or she was completely snow white then, and now it’s beginning to show the typical hawk coloration. (I couldn’t get the drone in just the right spot to get the bird’s head; it’s apparently pretty shy. Darned paparazzi!) 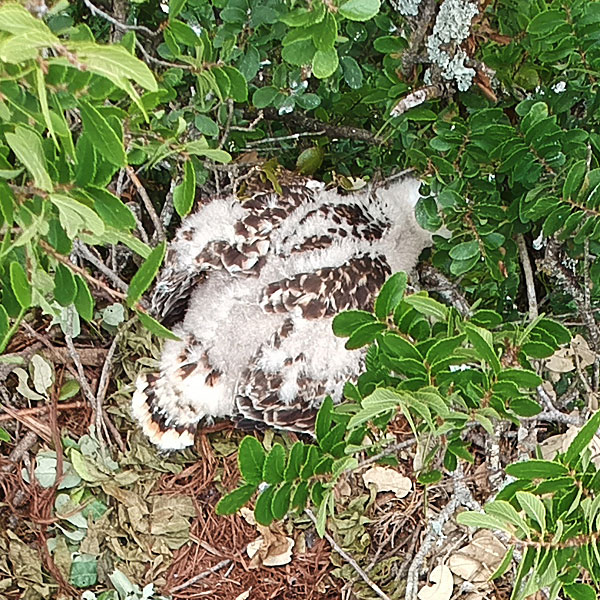 Speaking of birds, Debbie has installed a couple of feeders on our back fence. Well, technically, I installed the feeders under her supervision, but she keeps them filled. Or she tries to keep them filled. They both get emptied pretty quickly, but the most recent one — designed to hold munchies that are said to attract woodpeckers and similar birds — has been suspiciously quick to require refueling. I say “suspicious” because we don’t see enough birds during the day at that feeder to explain the disappearance of the food.

Now, the feeder is allegedly squirrel-proof, and we haven’t seen any of those little rascals even attempt to raid it. But the nightly disappearance of food led us to believe something else was at work. So last night I set up a trail camera on a tripod in an attempt to identify the issue. I’m sure none of you will be surprised by what we found: 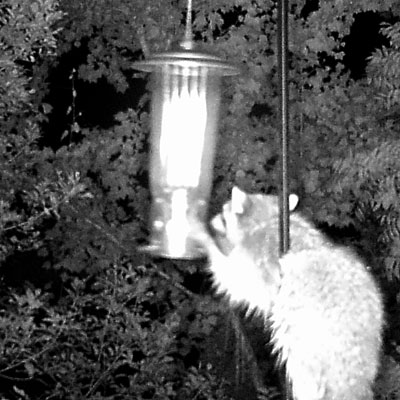 Yep, the feeder may be squirrel-proof, but raccoons didn’t read that part of the manual.

This morning, I raised the height of the feeder another 18″ or so and we’ll see how adept they are at breaking into the new installation. Frankly, I’m not optimistic. I think the feeder is out of reach as long as they stay on the fence, but we may have to resort to putting Vaseline on the pole to prevent them from getting to the food by that route. Stay tuned!

Now, back to the youngsters. A few days ago I spotted four (FOUR!) small armadillos nosing around in the vacant lot on the west side of our house. Debbie and I headed out to see how close we could get to them. As it turned out, we could get pretty close…as in right on top of them. They were laser-focused on rooting up worms, grubs, and other insects.

It’s rare to see armadillos during the day. They typically sleep about sixteen hours a day, similar to human teenagers on summer break, and forage for food at night. But we’ve had a lot of rain lately and that seems to increase the likelihood that they’ll be out during daylight hours.

However, it’s not unusual to have four youngsters together (although I’ve never seen it in person before). The nine-banded armadillos we have in Texas always give birth to identical quadruplets.

I put together a four minute video of their antics; feel free to check it out. They’re cute little rascals, and fun to watch…but if they decide to use our lawn as a buffet, I’ll be forced to induct them into the Fire Ant relocation program. (Bonus feature: See if you can spot the misspelled word! There’s never an autocorrect around when you need it.)