We’ve had a lot of rain recently here in the Texas Hill Country, and the combination of rain and warmer weather has brought on a seasonal nuisance in the form of ticks. And, apparently, we Texans have plenty of company in that regard.

Last week, NBC’s The Today Show ran a segment on dealing with the nasty little critters. Here’s a frame from that segment:

This isn’t a particularly helpful graphic so let me fill in some blanks for you. 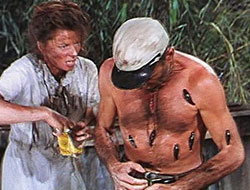 Bogey wasn’t as tough as you think; he refused to let the studio use actual leeches and insisted on rubber ones instead. Sheesh.

[Important update…this just in! According to most experts, if you’re reading this and have no skin, you should seek medical help immediately. You may have worse problems than ticks.]

Found a tick? Here’s what you do. You rub salt on it. Wait, that’s not right…I’m thinking of The African Queen. Them ain’t ticks; them’s leeches. But for ticks, the CDC says to use tweezers, and the CDC is never wrong.

How to prevent Lyme Disease? Avoid ticks and anyone who looks (or acts) like a tick. Mask up, if it makes you feel better. Just don’t go rolling naked in the meadow. Trust me on this.

If all of this is too complicated and you find yourself covered with ticks, there are a couple of really effective remedies to try.

My recommendation is to get yourself a possum. 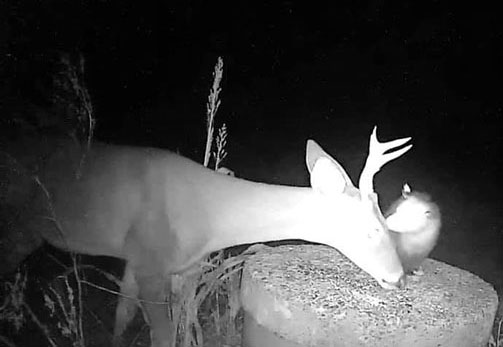 Is this the tick equivalent of a Golden Corral?

In case you don’t recognize the players, this is a trail camera photo of a possum dining on ticks attached to the face of a white-tail buck.  [insert your movable feast joke here] If you find this scene rather disgusting, you’ve never had ticks on your face whilst having your hands tied behind your back.

This photo was taken in 2019, in Vermont, of all places, but it seems to have resurfaced in a viral fashion. It’s a pretty cool example of an unexpected symbiotic relationship between two species which aren’t normally associated with one another. It’s almost enough to give you hope for the U.S. Congress.

Now, it should be common knowledge that possums play an important role in the local ecology. They eat lots of stuff that can cause problems for us, like snakes (even venomous ones), mice, centipedes, and — you guessed it — ticks. They are also highly resistant to rabies due to their low body temperature. So, whenever you’re tempted to diss a possum, remember its selfless service to animal kind, and give it a break.

Of course, you might find it impractical to keep a possum around just in case you need deticking. There’s one more approach some of you might find attractive, and by “you” I mean “you who are young and single (or perhaps not-so-young and/or not so single; who am I to judge?) ladies who like country music.” Brad Paisley could be your possum (with all due respect to George Jones).