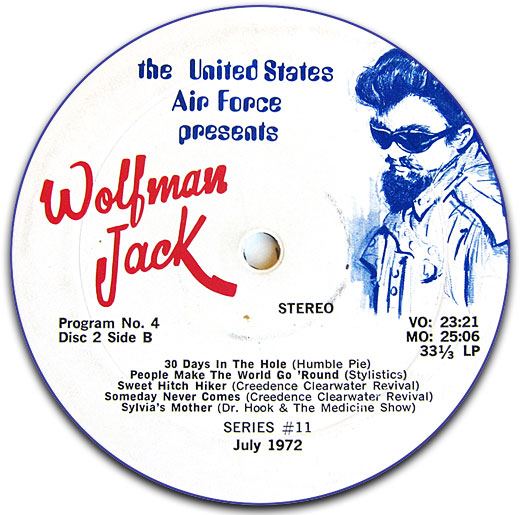 This is the label from a promotional LP featuring Wolfman Jack on behalf of the United States Air Force. For the back story about this series of PSAs, plus others from the US Marine Corps, check out this previous Gazette post.

And speaking of Public Service Announcements, I have a couple of tips for how to determine if you need to clean out the gutters on your house. First, you may need to clean your gutters if they’re sprouting trees. 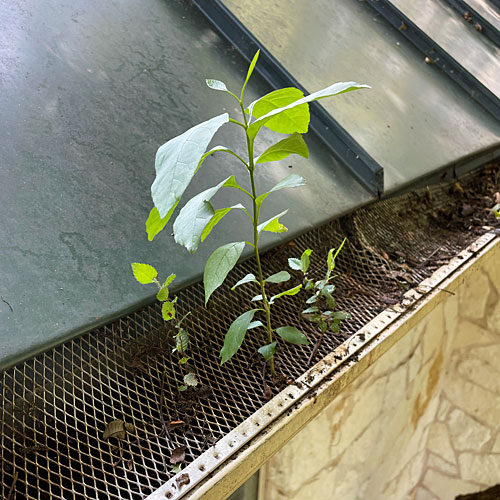 The squirrels have apparently decided to plant their own forest, anchored by the pecan tree seedling in the middle, and flanked by a couple of elms.

The second indication that your rain gutters (and accompanying valleys) may need remediation is the existence of a thriving micro-environment.

We didn’t just pull the name “Casa Fire Ant” out of thin air, you know.

When I climbed a ladder to pull debris from the gutters and roof, this is an actual photo of what I uncovered. I’m pretty sure those are fire ants, and I have no idea how (or why) they set up shop twelve feet off the ground. Fortunately, I was wearing gloves, and I quickly retreated and then returned armed with Hot Shot ant spray. I may have named this blog after them, but that doesn’t mean I have to coexist with them.

The Delta variant may be surging but that hasn’t prevented the return to some semblance of normalcy, as evidenced by the first dance in about eighteen months at the Lakeway (TX) Community Center, sponsored by the City of Lakeway Arts Committee and featuring the 16-piece (plus vocalist) Republic of Texas Big Band. 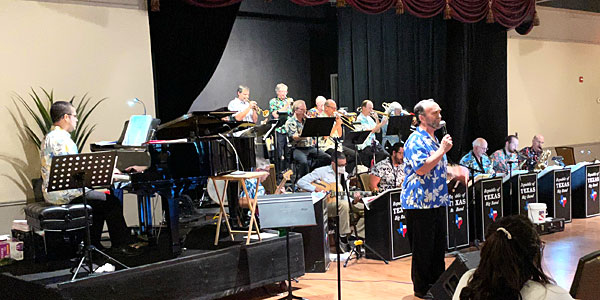 These guys (and gal) really know how to swing!

Debbie and I didn’t know what to expect, crowd-wise, but lots of people were apparently itching to get out of the house and back on the dance floor. I estimate the crowd at about 75% of what it was, pre-pandemic. And I have to say that the band has never sounded better, alleviating our concern that perhaps the layoff would make them a bit rusty.

We were also concerned about our own layers of rust. The (very) occasional practice sessions in the living room or the garage didn’t exactly engender confidence about our skill on the dance floor. But as it turned out, muscle memory is actually better than, um, actual memory. It was all good, mostly smooth, and I took only one firm elbow to the side of the head from my partner (much to the glee of a couple of tables of onlookers).

This is one of the very few regular ballroom dances available to us in Central Texas, and it’s a welcome addition to the multiple country music venues. Oh, did I mention that it’s free (generous tips for the band are encouraged and, quite frankly, earned)?

If we had any suggestions for improvement at all, they would be around a wider variety of dance music: fewer foxtrots, and more Latin arrangements and waltzes. But that won’t even come close to stopping us from attending.

Feel free to discuss amongst yourselves whether an indoor gathering of unmasked people engaged in vigorous physical activity is appropriate; as for us, we’ll be over there dancing.

OK, I’m going to switch gears here and engage in the rare political rant. I don’t do that very often, and if your appetite for such matters has been over-sated to the gagging point (I can hardly blame you), feel free to scroll down to the squirrel photo at the end.

But just when I think the current administration in Washington has reached the apex of cluelessness and/or incompetence, they come out with a plea to OPEC to please pump more oil.

I have no words to adequately express my disgust at the ignorance and hypocrisy of this situation. Fortunately, there are folks who do. Check out today’s editorial (although, in reality, it’s actually a statement of facts…and we know The Administration is a big believer in facts, right?) in the Wall Street Journal.

This article may be behind a paywall; if you can’t access it, following are a couple of excerpts that will give you an idea of the subject matter. First this:

“Higher gasoline costs, if left unchecked, risk harming the ongoing global recovery. The price of crude oil has been higher than it was at the end of 2019, before the onset of the pandemic,” Mr. Sullivan’s [the national security advisor] statement said. “While OPEC+ recently agreed to production increases, these increases will not fully offset previous production cuts that OPEC+ imposed during the pandemic until well into 2022. At a critical moment in the global recovery, this is simply not enough.”

Well, how might we go about making up that shortfall? Surely the abundant reserves in the United States — as well as our proven ability to extract them — would be a good place to start. Surely…

But since taking office, the Biden Administration has killed the Keystone XL pipeline to transport oil from Canada and the Bakken Shale to Gulf Coast refiners; canceled oil leasing in Alaska; suspended oil leases on federal land, even after a court ruled the moratorium illegal; increased fuel-mileage standards for cars, which favors electric vehicles; and invoked the Endangered Species Act as part of a strategy to reduce drilling on private land in the West. No doubt we’re missing something.

Someone should ask Mr. Biden, on his next stop for ice cream, why the President thinks oil produced by foreign dictators in Russia, Iran or Saudi Arabia is more desirable than oil drilled by American entrepreneurs.

There’s a lot more I’d like to say about this subject, but I know you don’t come here to hear ineffectual rants. I do know you come here for…oh, look…a baby squirrel! 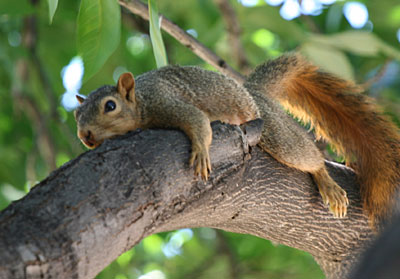