I’m sure most of you are itching to know what’s going on with the garden spider I introduced a week or so ago. As you may recall, said spider wasn’t exactly batting a thousand when it came to closing the deal on a meal, so to speak. But I suppose it was getting by…until a couple of days ago, when I noticed that it and pretty much all evidence of its web were no longer haunting gracing our garage window. So, unless it packed its bags and moved somewhere the property values are more reasonable, I have to assume that it discovered the hard way that there’s always someone bigger and meaner than you. [Cue Bad Bad Leroy Brown mood music]

Of course, I have no idea what that bigger someone was, but I have my suspicions. 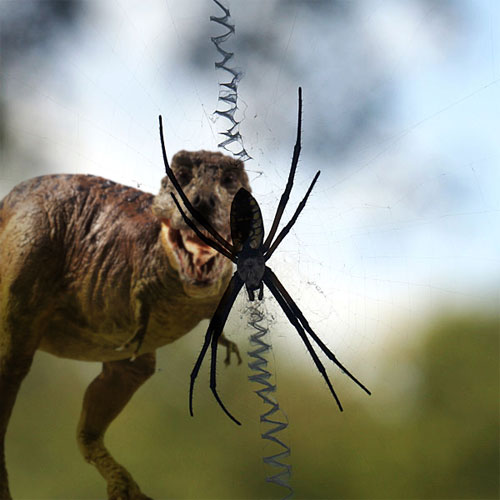 On a sorta semi pseudo-related note, as long as we’re updating some local wildlife reports, our Texas spiny lizard is still hanging out in the garage, eating bugs and spiders — wait…you don’t think? Nah…surely not… — and pooping everywhere, and while it may be my imagination, I think it’s getting accustomed to my presence. At least it’s not diving under the treadmill the instant I come into the garage.

If that’s the case, it may be because I finally wised up and set out a paper plate which I fill with water almost every morning. I’m not that wise in the ways of lizards but I figured that it wouldn’t hurt to put out some water just in case it wasn’t getting sufficiently hydrated from food sources. I did wonder, though, if my efforts were being recognized by the target of my largesse.

That question was put to rest a couple of days ago when I watched the lizard creep slowly from under the treadmill and make its way to the edge of the paper plate where it proceeded to drink some that morning’s refreshment.

As is my wont, I determined to capture some photographic evidence of this phenomenon, so I set up a GoPro camera aimed at the dish, and configured to take a photo every 30 seconds. Each morning, I would refill the plate with water, and turn on the camera, letting it do its thing for a couple of hours. I would then return and scroll through the images on the camera (is it obvious that I’m retired?), looking for the affirmation that I hadn’t imagined what I thought I saw. And for several days, it did appear that it had been an illusion, a cruel joke foisted on me by an uncaring Mother Nature and/or a decaying brain.

But this morning’s efforts erased all doubt. I finally caught the little guy/gal in the act, and here’s the proof:

You can lead a lizard to water, and sometimes it will drink.

Let’s talk about music for a minute, shall we? First, here are the last ten songs that iTunes shuffled onto my phone this morning:

Pretty interesting, huh? And, guess what they all have in common, other than being comprised of 1s and 0s which are magically converted into sound waves? Uh…well…nothing, actually. So, never mind.

I have, within the past two days, purchased two new albums, which I now recommend for your consideration. The first is alluded to in the list above…the album name is Hang On Little Tomato by Pink Martini, and the songs on this 2004 album are almost as eclectic as the list of music I provided above. The group consists of a dozen musicians, and they’ve performed songs in 25 different languages (not all at the same time…I’m guessing) in a wide variety of styles. My pal Sam played the title track of the album for me on Monday, and it features a wonderfully accessible clarinet solo, and I’m a sucker for clarinet solos that make me foolishly think that, yes, I could do that. (Reality inevitably harshes my mellow.) I immediately downloaded the entire album.

Then, yesterday, I purchased Sturgill Simpson’s new album, The Ballad of Dood and Juanita, released last month. I’ve previously confessed to being a Sturgill fan, and this album generally reinforces my fandom. It’s mostly bluegrass/Americana/throwback country in genre, with one great exception — a Latin-style number called Juanita and featuring Willie Nelson on guitar. [Some have expressed  astonishment/disappointment that Willie doesn’t sing on the track, but his unique guitar phrasing is unmistakeable.] The album is short — less than 30 minutes of music — and designed to be listened to straight through, even if most of the tracks stand up well by themselves.

If it sounds like I’m damning the album with faint praise, it’s only because there’s not a lot of meat on the bones. Three of the ten tracks are a minute or less in length, and one song is sort of a remixed epilogue of the introduction. OTOH, Simpson is a skilled storyteller and if you approach the album with that in mind, you’ll be rewarded for your time.

We might as well wrap this up with more music. Here’s one of the songs I think I’d like to have played at my funeral.

I changed my mind (not about the funeral song, but about how to end this post). Here’s a tree frog resting on a poinsettia leaf. Sorta makes you look forward to Christmas, huh? [There’s more where this came from over on my Instagram page. Hint, hint.] 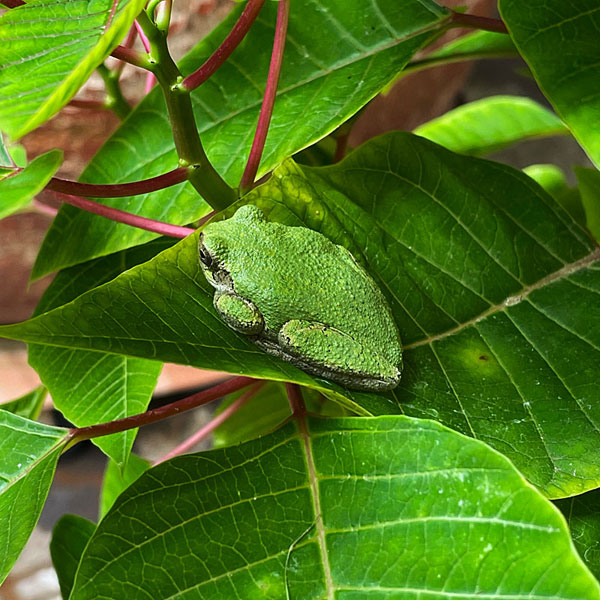