…because Foto Friday was already spoken for. Plus, I’m a procrastinator.

Here are some pictures I took. 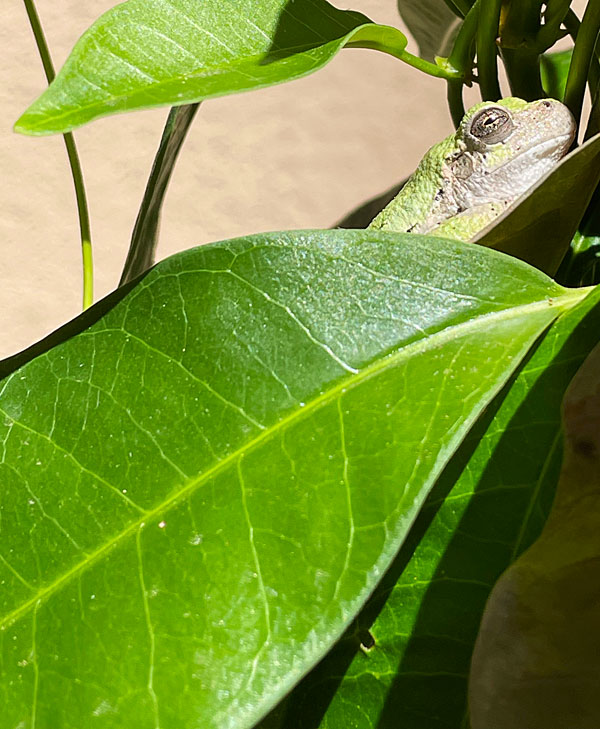 Where’s a pair of Wayfarers when you need them?

The green tree frogs have been numerous lately (or perhaps there’s just one and he/she is someone ubiquitous). But it’s a bit rare to see one in the bright sunlight like this. It soon retreated into the shade of this mandevilla. 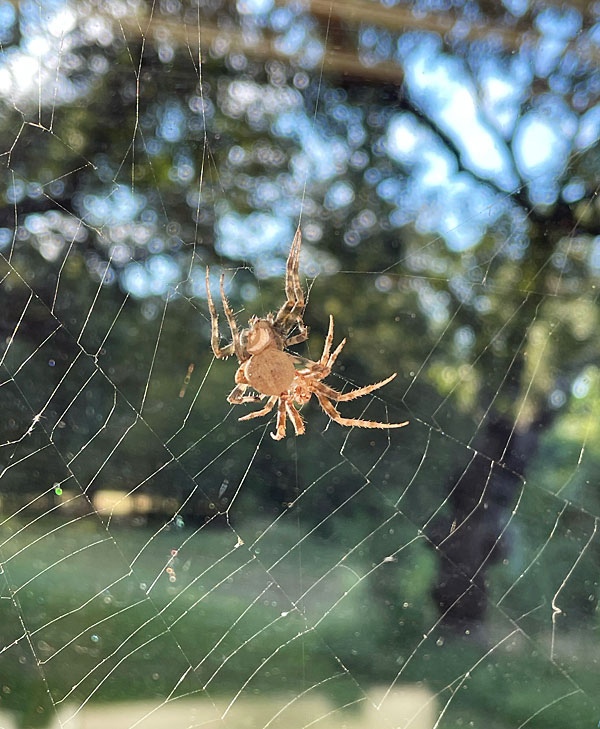 For a couple of days this week I was watching yet another arachnid activity outside one of our windows. This one had me puzzled. It appeared to be two spiders. Was there a meal taking place, or was it a bit of spidery hanky-panky? I had no idea, but this scene persisted for almost two days.

The next day, this was the only thing left: 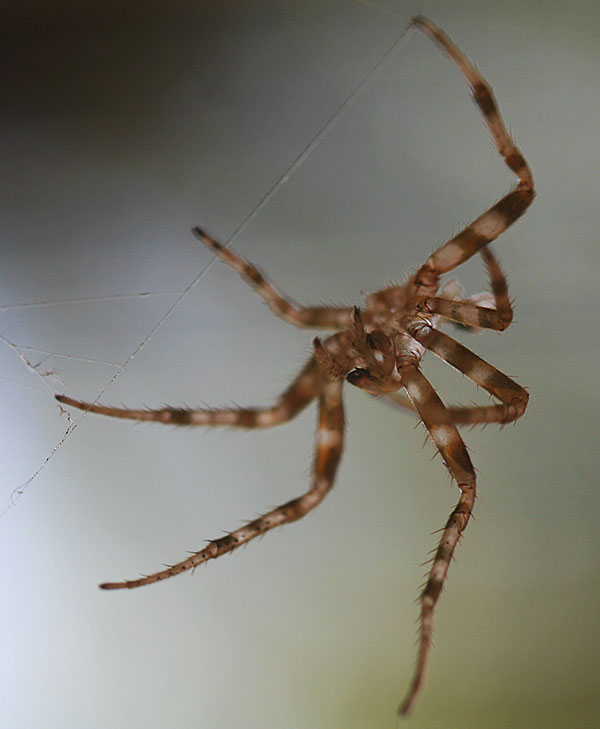 No wonder it took the spider two days to wriggle out of this.

It’s the same scene; I just used a macro lens to get up close and personal. I was now even more confused, as this spider was moribund to the max. So I turned to my go-to resource for insect identification: the Antman’s Hill® Facebook group. The experts there quickly explained why my spider wasn’t skittering about. This is actually a molt…the shed “skin,” if you will, of the spider shown in the previous photo. Pretty amazing, huh? (Those experts never did, however, identify the spider for me. I guess they figured that anyone who couldn’t tell a spider corpse from a live one was probably hopeless. And, of course, they were right.) 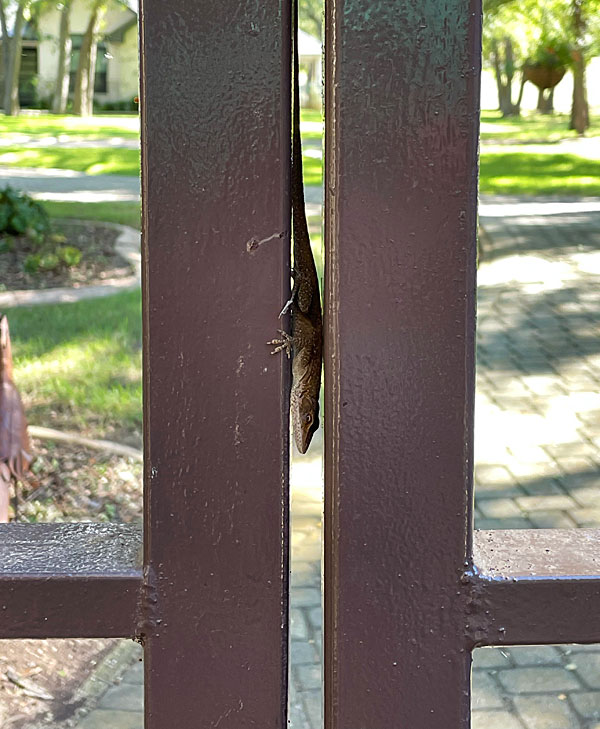 Move along, folks…nothing to see here.

Some people have fence lizards, others have tree lizards. Some even have brush lizards, which presumably are afraid of heights. We, however, have gate lizards. (OK, it’s really just an anole whose camouflage isn’t as effective as it thinks.) 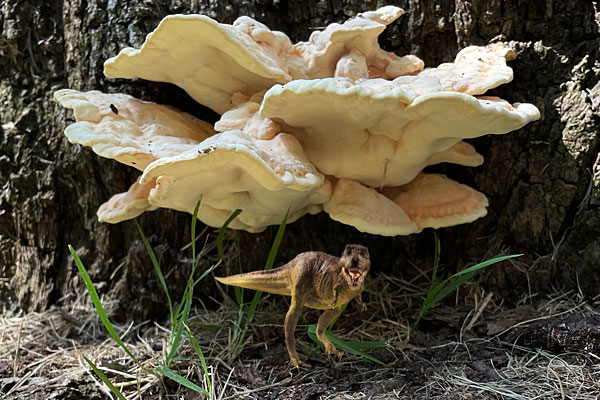 Tree fungi pop up in the weirdest places sometimes, but they provide a valuable service to tiny creatures needing respite from the Texas summer sun.

This final image is going to require some explaining. 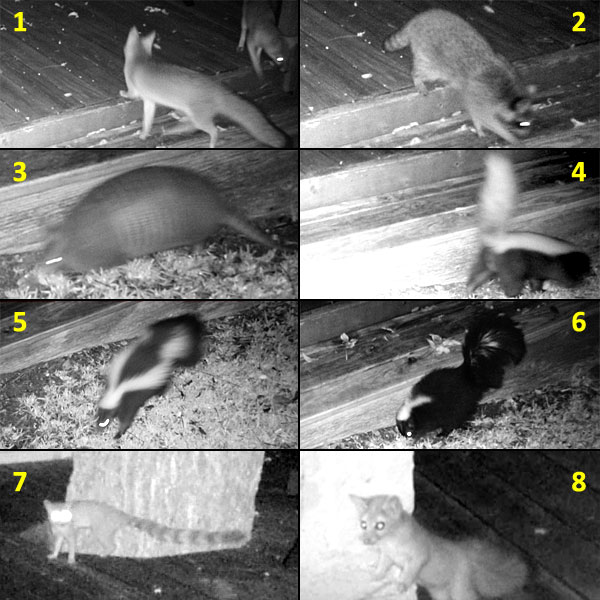 This is sort of a collage of critters that visited our back deck over the course of two evenings. Most of them require no identification (but I will provide one anyway), but there are some things worth noting.

I’m always surprised at the variety of coloration in skunks. Besides the ones pictured above, we’ve seen on that’s almost completely white.

The ringtail was a terrific surprise. They are presumably fairly common, but also very shy and elusive, and this is only the second one we’ve photographed in four years of living here. As you can see, the animal’s tail-to-body ratio is ridiculous.

And with respect to #8, the more I watch the video (all of these photos are screen shots of frames from videos), the more I think this is the same juvenile fox that appears in the first photo. It’s a cute little rascal.

There’s never a dull moment when it comes to wildlife around Casa Fire Ant.