I hate to disappoint you if you came here looking for tips regarding scorched bread, but while I am an acknowledged — yet exceedingly humble — expert on the subject, I’m actually here to warn you about the app named Toast.

You may have encountered Toast at a restaurant that has adopted it as its point-of-sale management tool. It apparently does a lot of different tasks for the restaurant, but the one I’m writing about is the ability to allow patrons to pay their tabs via phone using Apple Pay or another mobile wallet app. I’m a big fan of this capability, primarily because I’m impatient and the check settlement process at many (most?) restaurants is inefficient and time-consuming.

My typical experience with this process goes something like this. The server brings the ticket to your table and then immediately goes to take the orders for a party of fourteen non-English-speaking tourists who require an explanation via Google Translate of every item on the menu. Thirty minutes later, the server comes back to pick up your payment, and if you’re paying by cash, you will inevitably need change because you only have two twenties for a $21 tab. That takes another thirty minutes because the server remembers that their car needs a new inspection sticker and what better time to go get it than right now. 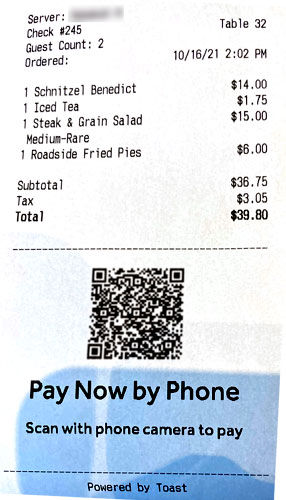 Given that usual state of affairs, I was pleasantly surprised on Saturday when Debbie and I stopped by Hill & Vine* in Fredericksburg for brunch and found that the restaurant accepted Apple Pay via the Toast platform. Our printed check had a QR code that took us to a digital version that could be paid via whatever credit or debit cards I had loaded in my iPhone’s wallet app. (The option to pay via debit card is especially nice since there’s no physical card to be handed over to someone. I don’t mind doing that with a credit card, but I never use a debit card if someone else has to touch it.)

I scanned the QR code — and inadvertently took a photo of it, shown at right. As it turns out, I’m glad I did, as it helps me illustrate the ensuing chain of events.

The QR code let me open the aforementioned digital version where I could choose my payment method, which in this case was a debit card via Apple Pay. It also allowed me to add a tip for the server, and I selected the 20% option and hit the “pay now” button.

I immediately received a confirmation from Apple Pay, followed quickly by a confirmation email from Toast. But I noticed something strange about both confirmations, shown side-by-side below. See if you can spot the puzzling aspect. 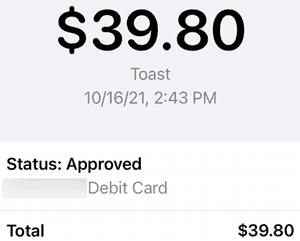 Alert Gazette reader that you are, you’ve no doubt instantly noticed the same thing I did: there’s no tip.

I flagged down the server and asked if she was able to confirm exactly what payment was entered into the restaurant’s system, because the last thing I ever want to do is stiff the help. She punched around on the keypad of her little magic ordering device and pulled up the internal receipt and showed it to me. Nope; no tip appeared. I was sure I had selected one, but the evidence indicated otherwise.

I apologized, pulled a $20 from my wallet, and asked her for $10 in change. It took long enough for that to happen that I would have been just as well off to pay cash to begin with, but we were finally able to leave the restaurant with a clear conscience. All was well.

That is, until I looked at our checking account balance this morning and saw what actually hit the account via our debit card.

How about that? My original 20% tip magically appeared on the actual hit to our checking account. Thanks to the obscure machinations of the Toast app — or, possibly, the inability of the server to access the final payment screen on her magic tablet — said server ended up with a generous 40%+ gratuity (my initial 20% on the card plus the apologetic sawbuck).

This is a long and boring cautionary tale for those who seek to remove time from the transaction cost of a restaurant meal. I have a hard time believing that the Toast app is really that inept, but the documentation seems to indicate otherwise.

This issue with Toast is a different animal than with normal credit card processing. When you leave a tip via a credit card, there are actually two steps to the transaction. The cost of the meal was automatically charged to your account at the time the tab was rung up. The tip, however, is manually added by the restaurant after the fact. That’s why the before-tip total often shows up in your bank account as pending charge, and the final tab+tip amount later appears as the final total. The Toast process, OTOH, appears to include the tip in its final computation of the total charge — IOW, we’re actually “ringing up” the total charge on the app — which is why the absence of the tip on the confirmation is puzzling. Here endeth the lesson on credit/debit card tips.

The moral of the story has nothing to do with my leaving a relatively exorbitant tip; $10 extra dollars is not remotely life-changing in this situation. But as an increasing number of restaurants move toward “pay at the table” mobile options, it seems that one has to have an increased sense of skepticism about whether those options really work as one would expect.

I have, by the way, left some feedback on Toast’s app to document what took place, and gave the developers permission to contact me if they’d like further details. We’ll see whether that happens.

*Hill & Vine is, for those of you who are familiar with Fredericksburg, Texas, the restaurant that was constructed and opened this year on the site of the much beloved Peach Tree Restaurant and Gift Shop. As much as we enjoyed our Peach Tree experiences, stretching back decades, I have to admit that H&V is a more-than-worthy replacement for that venue. If it’s not already, it will become yet another must-visit location on the Hill Country scene.