Happy Thursday, y’all! Today is National Chocolate Day. And is it a coincidence that it’s also National Internal Medicine Day, as well as National First Responders Day? I think not; you should take comfort in knowing that if you overindulge in the food of the gods, *someone* has your back. Or insides. Or…whatever. 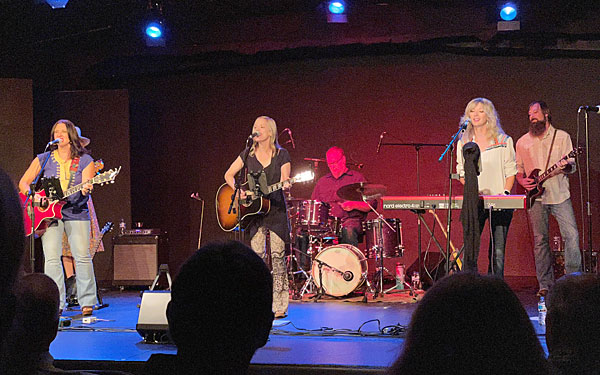 SGH covers songs from the Golden Age of Music: the 60s and 70s-D (i.e. minus disco, because no one wants to relive that). Their playlist was perfect for the crowd in attendance as they — OK, fine..we — skew boomerish. IOW, this is our music.

The band has some videos up on their website and on YouTube, but the vids don’t do their musical gifts justice. If you have a chance to catch them live, don’t pass it up. Our only complaint is the same one we almost always have, and it’s not the band’s fault: no dance floor.

We had a wee bit of wind early yesterday morning, and awoke to this scene in front of our house. 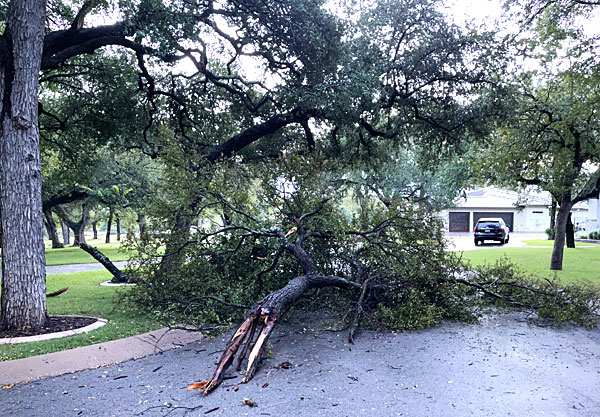 This mess is a combination of cedar elm and live oak limbs. It appears that the elm limb (the nearest to the foreground of the photo) snapped off, hit the oak limb — you may be able to make out the broken stump in the upper left of the photo)  on the way down, and both crashed into the street. Fortunately, ours is the only house at the end of a cul-de-sac, so there no traffic was blocked.

It’s hard to get sense of the scale of this pile of debris. It took about an hour of chainsaw work to break it down into manageable pieces, which in turn required five pickup loads to haul to the city’s yard waste collection area. 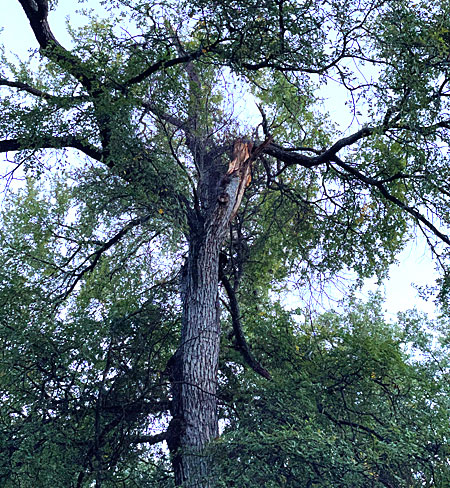 Ironically, I had scheduled a visit by an arborist next week to come out and assess the health of our trees, and to give us an estimate for cleaning them up. This particularly cedar elm is probably fifty feet tall, and I can’t help wondering if it needs to be taken out completely. That would be a shame, but the prospect of more falling limbs is frightening, to say the least.

Speaking of chainsaws, I’m not sure I’ve mentioned that I bought a new one back in August. 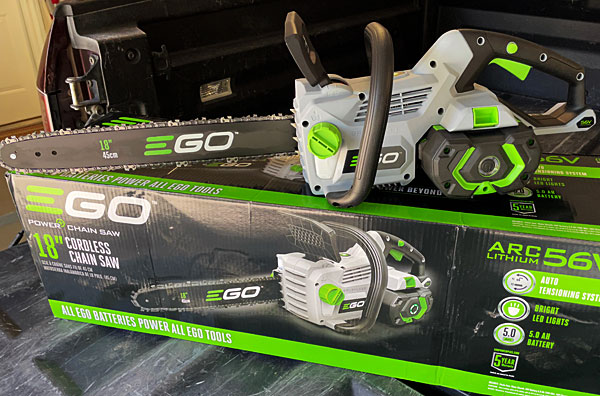 Having acquired an EGO battery-powered lawn mower in May, I was already impressed with the quality and performance of the brand’s products, and I was tired of working around the extension cord of the decades-old 12″ electric chainsaw I inherited from my father-in-law. After a bit of research on the various models made by EGO, I chose the 18 incher, as I was swayed by the higher RPM (which equates to more and easier cutting power).

While this is not a professional-level saw that would be used for hours of work on a daily basis, it’s more than adequate for occasional use by someone like me. I’ve used it on tree limbs up to 12″ in diameter and it’s never skipped a beat. I mentioned above that it took an hour or so of cutting and trimming on the downed limbs, and the battery still had a 20% charge.

The saw is quieter than a gas powered model, and requires less maintenance. I really like the fact that you can turn it off to clear the work area, then it restarts — immediately and every time — with a push of a button.

Of course, it’s highly unlikely that this is the model Leatherface would choose to wreak havoc on humanity, but he’s got issues other than his commitment to environmentally-friendly lawn equipment.

Take a look at this photo, if you dare. No, don’t just glance at it; take a really close look. 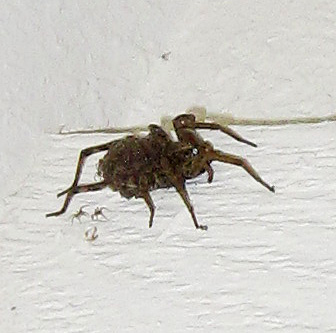 You’ve no doubt seen something like this before, although if you’re like me, you poured bleach in your eyes in an attempt to forget the sight. This is a female wolf spider and she’s lumpy not because of arachnid cellulite, but because she’s covered with — wait for it! — wolf spiderlets. (You can see that a couple of them have been kicked off the mothership, probably for bad behavior, although what constitutes bad behavior for a spider is beyond my desire to contemplate.)

Now, if your initial impulse upon seeing this photo is to grab a can of Raid and spray your monitor, you’re not alone. Actually, you may be alone, but many people share your revulsion at seeing a nasty a** spider covered with babies. And that would have been my normal response, but for the intervention of the Facebook group,
Antman’s Hill (which I’ve previously referenced).

As I’ve become more educated about the species, I view it with slightly less loathing than before. While wolf spiders will bite if threatened, their bite is deemed “medically insignificant” to humans, a description that falls a bit short in the reassurance category, but that’s just me. Anyway, they do have an ecological niche — they eat other insects that we humans might deem even more undesirable, although, frankly, I’ve had a hard time finding out exactly which insects those might be.

Also, they have eight eyes. In the preceding photo, all the little white dots are spider eyeballs reflecting my phone camera’s flash. Let’s say there are twenty baby spiders hitchhiking on mom’s back. That’s *cipher cipher* 168 eyes. All those eyes apparently are useful in hunting prey. Wolf spiders don’t spin webs…they track down and jump on unwary edible bystanders, not unlike Congresspersons looking for additional sources of revenue from unwary taxpayers.

So, the next time you see a sight like this, have a little empathy, especially if you’re a mother. How would you like to have your kids riding your back? What’s that you say? Oh…OK…never mind.

OK, lest you think I’ve gone soft, that wolf spider family was in our garage. I would be much less sanguine about its presence had it been in our house. Also, I’m pretty sure that Jim Morrison, our resident Texas spiny lizard, ate it the next day. Hakuna matata, y’all.