Faith and begorrah, it’s Saint Patrick’s Day, and the Gazette is assuming a [very temporary] new look. Notice anything different?

Actually, my immediate family — which, AFAIK, has no Irish heritage — has sort of a special relationship to SPD. I was born in the little Texas Panhandle town of Shamrock, and my brother was born on Saint Patrick’s Day (happy birthday, little bro!). So, we’ve got that going for us.

Last Tuesday night, Debbie and I attended a “dueling pianos” event at the Horseshoe Bay Resort. We had never done that before, and our expectations were way off-base. Instead of Chopin and Mozart and Dostoevsky — uh, maybe that last one isn’t who I’m thinking about, now that I think about it — we were treated to Aerosmith and Snoop Dogg (or whatever he’s calling himself today) and Charlie Daniels. The DP act was the Killer Keyz (very catchy), and their show was one of the more fun things we’ve experienced in a while.

It wasn’t just a couple of guys playing a predetermined set of songs on their pianos; the whole show was comprised of songs requested by the audience (consisting of around 500 people of all ages, from children through none-of-your-business). But to clarify, if you asked for a song and accompanied it by folding money, that was a “request.” Songs unaccompanied by pictures of dead presidents were “suggestions.” Pretty sure no suggestions made the big time, unless they were duplicated by people paying for the same song.

The evening was both a concert and a sing-along, and most of the songs were well-known to almost everyone. I mean, who can’t sing along with Sweet Caroline or American Pie? But then the KKs launched into Bohemian Rhapsody and I realized that there are a lot of people who had too much time on their hands at some point in their lives. I mean, the audience did sound impressive, but Debbie and I had nothing to contribute to the effort (we totally nailed American Pie, though).

I’m telling you all of this simply to say that no matter how good you sound as an audience when you sing Bohemian Rhapsody near the end of a two hour concert (did I mention the cash bars stationed at every corner of the really big room?), you’ll never top this version:

I think I may have mentioned that I’m attempting to learn Spanish via the Duolingo app. After more than four years of Duolingo, spanning literally hundreds of lessons, I can confidently say that I can read Spanish at about a third grade level, and I can speak it at a pre-K level, and I can’t understand it at all when it’s spoken to me.

Some of that is my fault — OK, a LOT of it — but Duolingo shares some of the blame. I mean, after completing lessons on the subjunctive mood, and all the tenses (of which there are approximately 87 in Spanish), this is one of the questions in a supposedly advanced lesson group today: 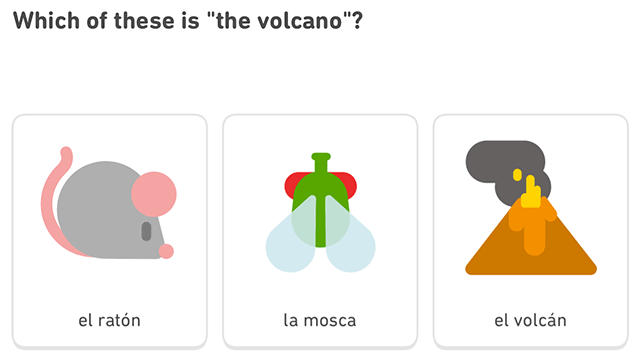 Perhaps they’re just throwing me a bone to keep me from getting discouraged about my progress. (By the way…I aced this particular question, so I’m fully prepared to discuss seismic phenomena with the yard guy.)

In closing, and still on the subject of communications, I’ve been trying for a week to exchange something I ordered via Amazon, and it’s been very frustrating. I thought I was being wise by ordering the product well ahead of the time I needed it, so it would be more likely to avoid any supply chain issues, but I failed to open the box within the “no questions asked” timeframe for returns. When I finally opened it, I found that the vendor had sent me the wrong thing.

The vendor claimed that it shipped the right product, and I’ve gone back and forth with them to convince them otherwise. Finally, yesterday they emailed asking that I send them photos of the box that the shipment came in (which, fortunately, I still had). I suppose they were trying to make sure I wasn’t scamming them, but I’m puzzled by why multiple photos of blank cardboard (other than the side with the shipping label on it) held any meaning for the company.

But what was most puzzling was when they asked that I send them photos of “all eight sides of the box.” That’s when I began to despair of a good outcome.

Fortunately, in the end they admitted their mistake and promised to make things right. Luck of the Irish? Who’s to say?