Well, hello there…don’t you look mahvelous! It’s an indisputable fact that Gazette readers are above average in both intelligence and pulchritude. But, please…try to be humble about it when in the midst of your less well-endowed acquaintances.

Today is National Devil’s Food Cake Day, which would normally be a cause for celebration, except that it’s also National May Ray Day, a time to “celebrate” sunshine. Lately, here in the Texas Hill Country, we don’t feel much like celebrating sunshine. I don’t know about where you live, but we’re hurting badly in these parts from a lack of rain.

For example, at Casa Fire Ant, rainfall since December 1st, 2021, amounts to just under 1.5″. One point five inches. In almost six months. That’s like, Gobi Desert stuff. We normally would have had around twelve inches or more by now.

While we’ve lived here full-time only for five years, we’ve been coming to the Hill Country for decades and we’ve never seen the countryside in such bad shape. And it doesn’t help — psychologically — to know that starting just 40 miles east of us, parts of the state are experiencing average or above average rainfall. Everyone around here knows that without a doubt we deserve that rain more than those other folks! 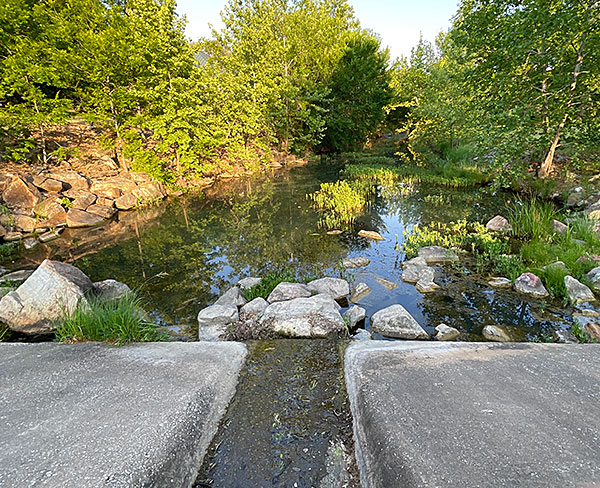 You may not be able to tell, but Pecan Creek’s flow is barely a trickle. It will likely stop flowing completely this week.

Seriously though, the dry conditions are subjecting us to the same wildfire danger as the rest of the western part of the country. On Wednesday, Debbie and I were returning from Bee Cave (just west of Austin) and drove past the beginnings of a grass fire around the Double Horn area on Highway 71. That proved to be just one of fourteen (14!) wildfires along a 20 mile stretch of Highway 71 (and as of the time of this writing, at least one of those fires is still not completely extinguished).

Ah…but enough of the whining (dear God, please honor our whining!). If we’re going to be truly random today, let’s see what else is going on.

Alert Gazette readers will recall that about a week ago, I documented a morning run where we spotted three snakes, including a venomous cottonmouth on the cart path. My pal Larry informed me a few days later that the Resort sent out a snake warning to all of its golfing members shortly after I posted that. Now, I’m not saying that the Gazette post was the catalyst for that warning, but I’m not not saying it either.

By the way, we saw another one yesterday morning, but I’m not saying anything. 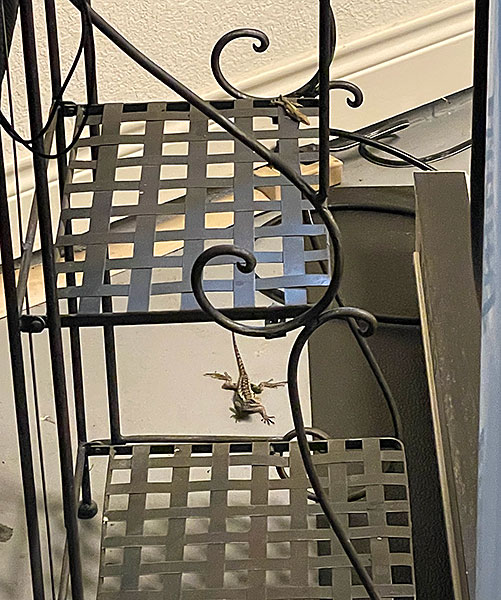 How many lizards can you spot in this photo. (Click on it for a larger version.)

In other reptilian news, we now have two lizards living in our garage. A small green anole has apparently joined Jim Morrison, our resident Texas spiny lizard. I wouldn’t exactly call them roomies, but they are hanging out in the same general vicinity, near our treadmill.

It’s actually a bit amusing. We have a small three-shelved baker’s rack next to the treadmill, and JimMo usually occupies the bottom shelf, while the anole spends the night on the top shelf.

We’re waiting to see if the anole sticks around before giving it a name. Feel free to suggest something. Regardless, we’re happy to have one or both providing free extermination services to our garage. If only they were potty trained.

In closing, allow me to cautiously recommend the three books that I’m either reading or have queued up to read.

I’m about a third of the way through The Men Who United the States, by Simon Winchester. The subtitle, America’s Explorers, Inventors, Eccentrics and Mavericks, and the Creation of One Nation, Indivisible, accurately sums up this deeply researched work of non-fiction.

I’ve also just begun John Scalzi’s amusing (so far) science fiction novel entitled The Kaiju Preservation Society. Ever wonder whether the movie Godzilla was actually a documentary? Well, wonder no more (and if you’re a true sci-fi nerd, you’ll revel in the myriad references to other works in the genre).

And last but by no means least — I hope — Mick Herron has a new Slow Horses/Slough House novel out entitled Bad Actors. I’ve not yet started it, but I have high expectations based on his previous novels about the spies who couldn’t but still did. 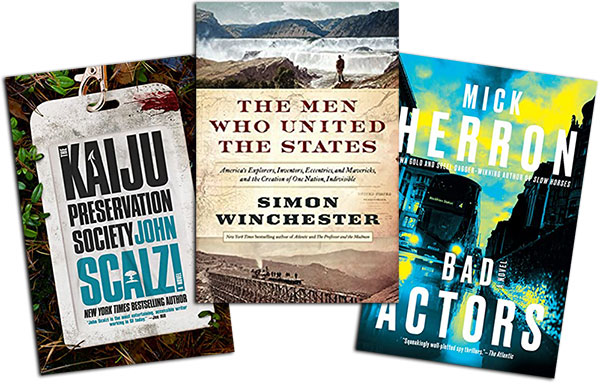