As if we don’t have enough to worry about nowadays, what with widespread wildfires, rampant inflation, a possible new wave of COVID, war in eastern Europe, and people gluing their hands to Starbucks counters, now comes a report of carnivorous armadillos that prey on lambs, calves, and other small and helpless mammals such as Danny DeVito. (Just kidding; I’m certain that DeVito can hold his own against scaly creatures.)

The Tetrapod Zoology blog has a pretty in-depth report on this phenomenon, including links to a couple of rather disturbing videos documenting this behavior. (Seriously…if you read the article — which you should because it’s fascinating — don’t click on the links to the videos if you possess a sensitive nature.) Not only are some species of armadillos foraging on live animals, they’re also dining on corpses.

Now, I’ve known for a long time that our lovable 9-banded armadillos, aka Dasypus novemcinctus aka the State Small Mammal of Texas, are omnivorous, meaning that they’ll eat pretty much anything they can stuff in their tiny little mouths. Alert Gazette readers will recall this post wherein I describe capturing on camera a marauding armadillo chowing down on a nest of turtle eggs. 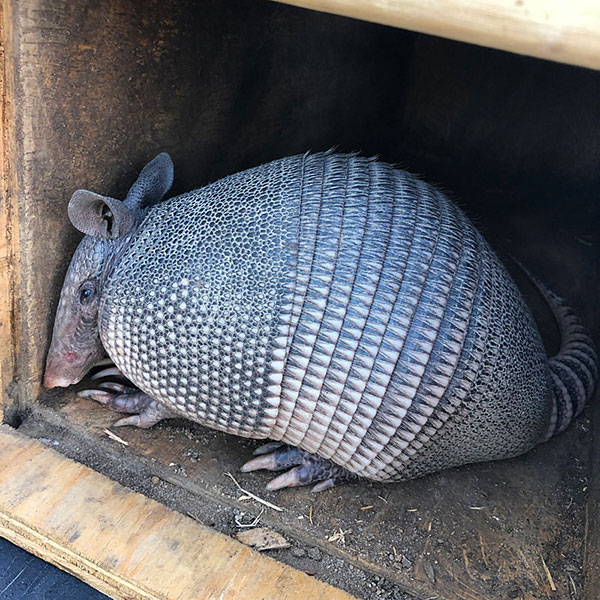 Relax. This one won’t eat your face. Probably.

Turtle eggs are one thing, though; baby livestock and wildlife, living or dead, is a whole other can of therapy material.

By the way, the nine-banded armadillo, in dramatic defiance of naming convention, refuses to be limited to nine bands; one can have from seven to eleven bands. But the “Seven-Eleven Banded Armadillo” presents obvious problems, primarily of a trademark nature.

The good news is that the bloodthirsty beasts are native to the South American continent and thus we’ll likely never cross paths except as fodder for nightmares or lame SyFy movie scripts. (Although, now that I think about it, Attack Of The Zombie Armadillos might make for a better flick than most of the standard SyFy fare, especially if they could convince Simon Pegg to play the lead.)