We’ve noticed some weird insect-related stuff going on around here.

First, in the adjacent vacant lot to the west there’s a plethora of these little mud tubes. They’re hollow and they crumble to dust between your fingers, but they obviously once housed a living…something. 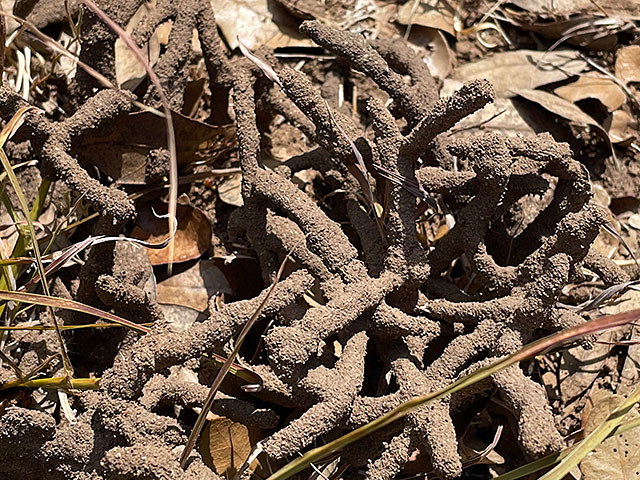 These are the work of agricultural termites (also sometimes called desert termites) which are essentially non-destructive unless you happen to be the blade of grass around which they’ve built their little mud hut in order to consume you. Their preferred diet consists of forbs (giving them something in common with whitetail deer), weeds, and grasses. They build these tubes in order to protect themselves from predators and heat whilst they dine.

The exact process they employ to build those tubes seems to be something of a mystery, although one website does mention “fecal material,” prompting me to go wash my hands…again.

And speaking of insect feces, take a look at this: 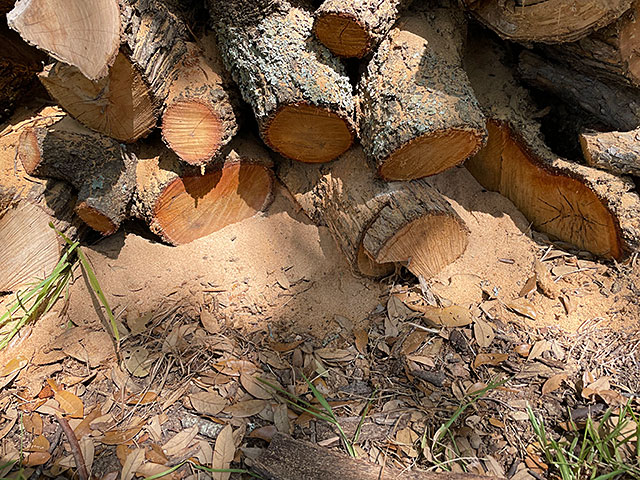 It’s not actually sawdust, you know.

Debbie noticed this first, and called my attention to it. At first…and second…glance, it looks like something is converting our firewood into sawdust. The reality is a bit more yucky. What you’re seeing in the preceding photo is frass, aka insect excrement, aka bug poop. Alert Gazette readers will no doubt recall that this is not the first time we’ve dwelt on frass — wait…that didn’t come out right — we’ve described the phenomenon, albeit originating from a different species.

Our stack of firewood is apparently infested with lyctid powder post beetles (“PPBs”). PPBs are wood-boring insects, but unrelated to termite. Their larvae have evolved to digest wood cellulose. The life cycle is interesting. Adults lay eggs on or just below the surface of wood, and the hatched larvae begin to eat their way into the wood. At some point they exit as adults, leaving behind “shot holes” (see photo below). The life cycle — which can last as long as a year — then restarts.

There are several varieties of PPBs; some prefer hardwoods (which are the kind we have), and others go for the softer woods. None of them, however, will infest treated (painted, varnished, etc.) wood. 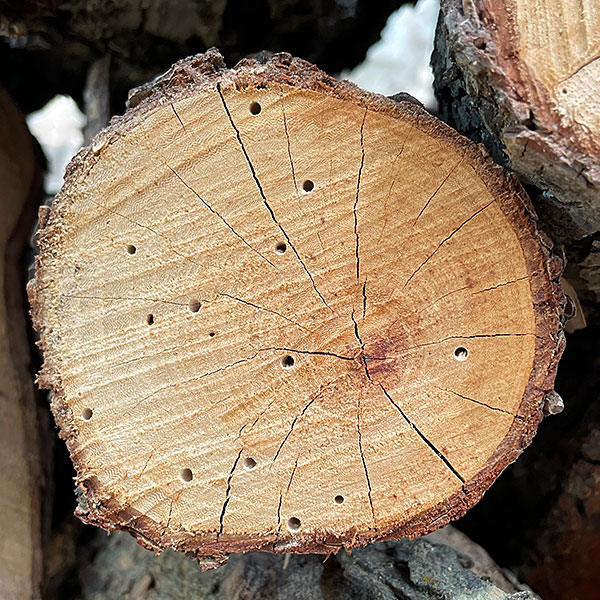 These “shot holes” are the work of powder post beetles.

While PPBs are don’t achieve quite the same level of notoriety as termites — they rarely cause structural damage in homes — they have been known to damage furniture, hardwood floors, etc. if they are somehow allowed inside. As with vampires, one should never invite a powder post beetle into your home. They are difficult to eradicate if given a foothold, but 1200º in a fireplace will do the trick. Just don’t bring inside any firewood that you don’t plan to burn immediately.

Last Sunday I was engaged in my normal important late afternoon activity — alternating between napping in the recliner and thinking about napping in the recliner — when I glanced at the back yard and saw something that appeared out of place. It looked like a stick or a long twig stuck in the lawn, as if it fell from the pecan tree and lodged in the grass. But I was puzzled about how it apparently managed to land and stay completely upright. 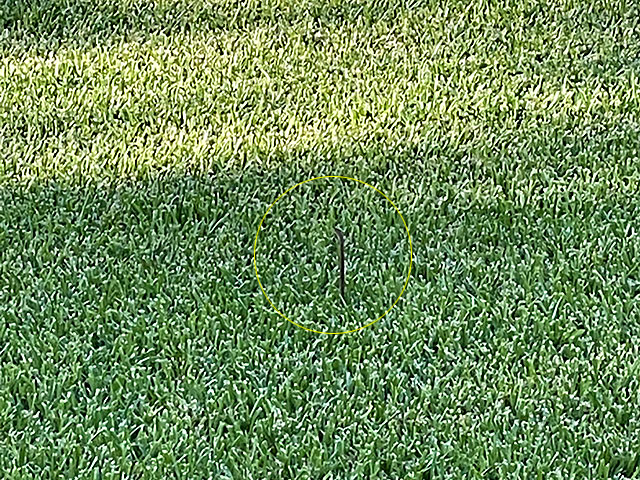 My curiosity won out over my lethargy; I grabbed my phone and went to investigate. I got to the edge of the porch and realized what I was seeing: a tiny “periscoping” western coachwhip (Coluber flagellum testaceus), a non-venomous, locally common subspecies of the coachwhip species. 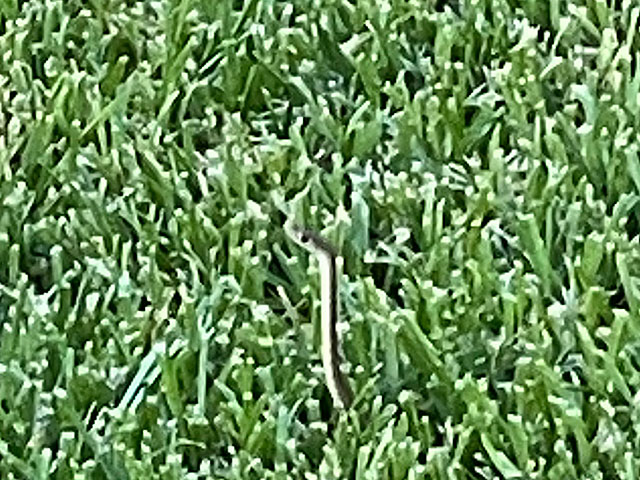 Excuse the excessive zoom; I was trying not to appear threatening.

We’ve come across coachwhips around our house a number of times (here’s the best example), but we’ve never seen this somewhat derpy periscoping behavior that they’re known for.

As I got closer, the little snake slowly retreated into the grass. 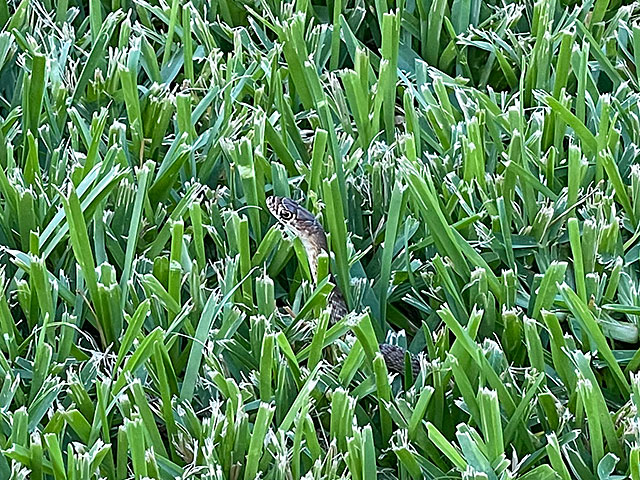 It’s not quite ready to fully retreat.

This “periscoping” behavior reminds me of garden eels. Anyone who has done much scuba diving in the Caribbean has probably encountered these small colony-dwelling creatures that inhabit sandy-bottomed shallows. And similar to the coachwhip snake, they gradually retreat into their burrows as one approaches them. 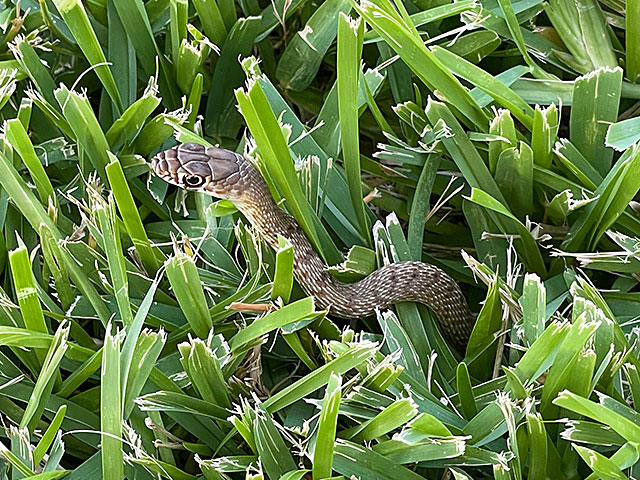 The shape of the head scales is quite distinctive.

The snake tolerated my presence long enough for me to get a few close-up photos. 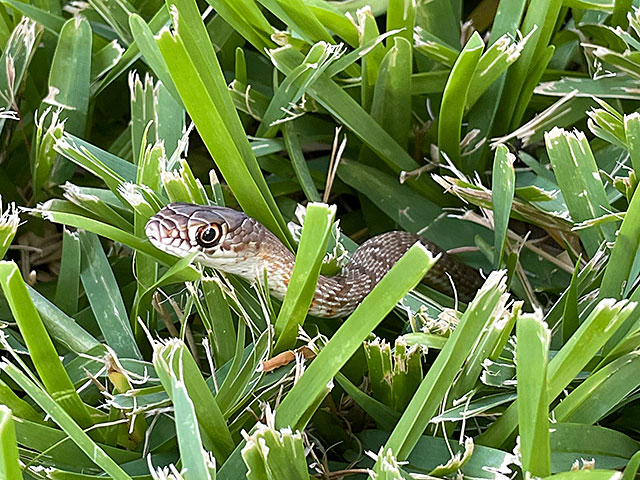 Ever heard the phrase “snake in the grass”?

I took one step too many toward it and it backed into the grass, completely disappearing for an instant (which gives one pause when contemplating walking barefoot across our lawn) before reappearing and fleeing in a flash toward the creek. Coachwhips are among the fastest moving snakes on the planet.

I realize that this isn’t everyone’s (anyone’s?) idea of a fascinating natural encounter, but we greatly enjoyed it. I couldn’t even resume my napping for literally minutes due to the excitement.