Konnichiwa, y’all! Today is World Ampersand Day…but I’m sure you figured that out already, right, just as I’m sure you knew that the & was once the last letter of the alphabet. It was eventually dropped because it messed up the ending of the song. Anyway, there’s a whole website devoted to the & because of course there is. We here at the Gazette are all about quirky typography & so forewarned is forearmed. [Ed. What does that mean?]

Before we get to less weighty matters, can we observe a moment of silence for the passing of a good friend & faithful companion: Jim Morrison, the Texas spiny lizard, late resident of our garage?

We don’t know why JimMo (as he was known to all his friends & pickleball compatriots) passed on to that Great Heated Flat Rock in the Sky, but the garage is a vastly lonelier place without his presence. I’ll forever miss his expectant, upturned lizardly little face each morning, wondering if today was the day I’d drop another half-dead water bug on the floor for his dining pleasure.

For at least 18 months, JimMo was a constant companion in the garage. I’ll miss his sunny disposition, off-key whistling, & little love notes in the form of lizard poop pretty much everywhere. 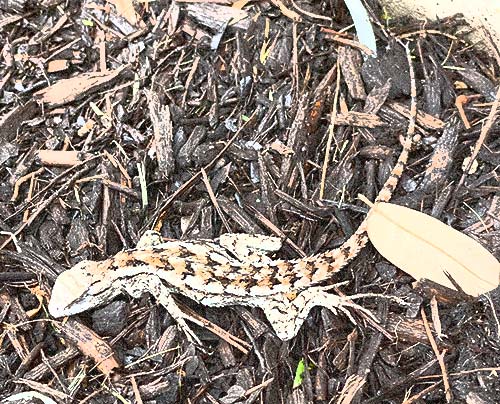 The Wall Street Journal recently ran a story about how herds of sheep are being employed as weed control on solar farms. [I’d link to it but it’s behind a paywall. My stuff is better anyway.] It seems that keeping grass and weeds mowed down under acres of solar panels is a challenge that the dumbest creatures on God’s green earth are uniquely qualified to h&le. Cattle & horses are too tall to get under the solar panel arrays; goats would do the job except they also tend to eat the wiring, as well as play “king of the solar panel”; & cats…well, don’t get me started.

Incidentally, the sheep breed of choice seems to be the Dorper, a breed of so-called “hair sheep” that has, well, hair instead of the traditional wool. So, they don’t need shearing & thus are lower maintenance. (They’re also really good to eat.)

I bring this up not only to educate you, but also to gently mock the WSJ, because the article was accompanied by this notice of correction:

Personally, I kinda like the idea of carnivorous Dorpers — turnabout is fair play, as they say.

At least they don’t have to deal with meat-eating armadillos.

& while we’re on the subject of…well, whatever subject we were on…I’d like to know what in the Sam Hill the Texas Exes are doing putting my name on their mailing list.

No offense (sort of), but I’m pretty sure a group of Longhorns wouldn’t be any happier with this Aggie in their midst for a 12-day boat ride than I would be to be there.

In closing, I’m unabashedly proud of a DIY project that didn’t go horribly wrong from the get-go. Check out this before-&-after collage:

The top photo shows the deteriorated passenger armrest on my 12+ year old truck. Debbie & I had tried a few things over the years to repair it, short of paying someone who knows what they’re doing. I mean, that’s just crazy talk.

But I recently saw a Facebook ad for sheets of adhesive-backed “leather” (they didn’t put it in quotes, of course, but I’m pretty sure that “PVC leather” isn’t really “leather.” The Chinese have their ways, you know.) & I figured I had nothing to lose but about twenty bucks.

Well, to make a long story short, it actually looks pretty darned good, at least for the interior of a truck that’s bearing down on 200,000 miles. The color even matches pretty well.

OK, there was one teensy hiccup in the process. I made a template of the odd-shaped armrest using masking tape. I laid that template over the back of the sheet of pleather, & when I cut it out & turned it over — you’ve already guessed it, right? — it was backwards. Fortunately, it fit perfectly on the driver’s side armrest, so I excused the faux pas as a test run. (IOW, I meant to do that.)

We also re-covered the center console which was in even worse shape. I took before-&-after photos of that, but in the spirit of “nothing ever goes completely 100% right,” the pictures were blurred to the point of being unusable. Take my word for it, though…the job was magnificent!

I guess we’ll have to wait a year to find out how the stuff holds up to the summer heat in Texas.

Oops. This is the actual “in closing” blurb. Sorry for any inconvenience.