Well, howdy, folks. I’m back — missing a couple of internal organs but apparently (so far) nothing I can’t live without — and because so many of you have been so kind as to inquire, here’s a quick update on my “situation.”

So, the good news is that I got rid of my leash a week or so ago. The bad news is that there are times when I kinda wish I still had it, but I’ll let your fertile imaginations run wild as you contemplate what I’m speaking of. Suffice it to say that it’s an unavoidable consequence of the surgery and I’m told that this, too, shall pass. I just wish it didn’t pass so frequently.

Ha…I crack myself up, sometimes. [Ed. You’re not really that funny. Stop it.]

It took two weeks for the pathology report to arrive. The good news is that there’s no evidence of cancer in the lymph nodes. The bad news is that there are still patches here and there in the nether regions. As a result, I’ll undergo radiation treatments once I’m fully recovered from the surgery. 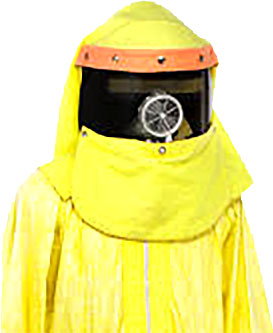 I’m already preparing for that phase of treatment…I’ve picked out a stylish ensemble, in keeping with my hard-earned reputation as a fashion icon. It will also provide me with some peace of mind in case you-know-who’s crazy gets the best of him and he hits the Big Red Button of MAD. After all, if it was good enough for Marty McFly, it’s certainly good enough for me.

The good news is that following a month or so of intrigue and despair, we’ve successfully gotten the following household issues resolved (listed in ascending order of criticality to continued sanity):

My primary worry now is that I’m lacking in things to worry about other than you-know-what. But I’m sure I’ll think of something.