I’ve said it before and I’ll likely be saying it on my deathbed, but sometimes I think I was put on this earth to be a cautionary tale for others. Watch what I do, and then either don’t do it, or do it in just the opposite fashion. But, at least this time I had an accomplice.

It all started innocently enough last Friday when Debbie suggested that we go shopping for a big metal cactus to place near our front door, as one does. We had a number of errands lined up for the afternoon so as to minimize the time we had to spend in Marble Falls, not that there’s anything wrong with Marble Falls, per se. We (and by “we” I mean “I”) simply like to make good use of time, especially when shopping is involved. I’m sure I’m the only guy who feels that way.

So, the agenda was pretty simple. Lunch at Chick-Fila, then up Highway 281 to Blair’s Western Wear, and from there to Pottery Ranch, home of cheesy (albeit apparently irresistible) home decor where the cactus hunting would take place. From there, we would wander back down 281, first to Lowe’s to look at outdoor storage bins, then to Wal-Mart for cupcakes and cookies (don’t judge), and, if I’m fortunate, back home after that.

Debbie had some specific criteria in mind for our greeter cactus, and it took a surprisingly short amount of time for her to choose this dangerous-looking metal agave for the low, low price of $158.31. 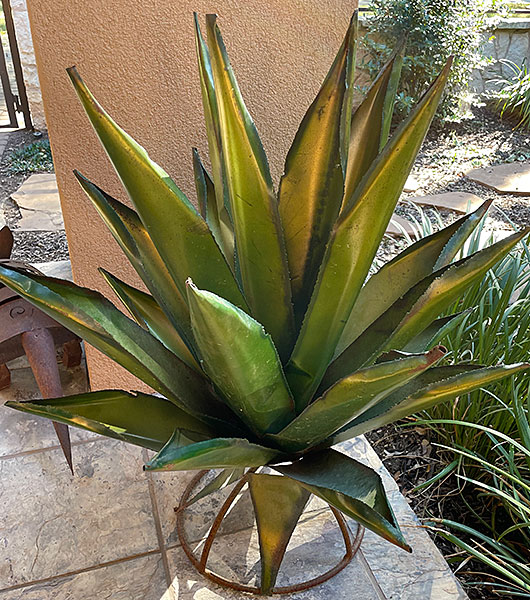 Now, since our next stop was Wal-Mart, I didn’t want to leave such an attractive nuisance unattended in the bed of the truck, so we decided to put it in the back seat. It was a tight squeeze, but we were able to get it situated on the seat, and used canvas shopping bags to protect the leather-ish upholstery. But, we wondered, what if it started moving around or, heaven forbid, we had a wreck. That stabby object flying freely around the cabin is the stuff of nightmares, so we did the logical thing: we strapped it securely with the seatbelt. It was satisfyingly stable.

We then completed our planned errands (with a side trip to Home Depot when Lowe’s failed to meet our exacting standards for outdoor furniture) and drove back to Horseshoe Bay.

I parked the truck in the garage and we unloaded the purchases from Blair’s and Wal-Mart (and our large diet lemonades from Chick-Fila), and then returned to extricate the cactus from the back seat. I clicked the button and released the seatbelt and we began the process of freeing the cactus.

It seems that the seatbelt took its protective responsibilities a bit more seriously than we had anticipated. Try as we might, we could not slide the seatbelt back over the spines of the cactus. For some reason, the retracting mechanism of the belt refused to let us pull it out to its full length.

Debbie would stand in the open door and pull from one side, while I knelt on the back seat and tried to thread the belt over the spines. Then, when that didn’t work, we had the brilliant idea of switching places, apparently so we could experience one another’s frustrations because obviously that didn’t make any difference. And, of course, the more we fought the cactus, the closer we came to wreaking havoc on the upholstery.

After what seemed like hours of impotent wrestling of an inanimate object that apparently still knew how to hate us, I grew increasingly desperate. I didn’t like the idea of having a metal cactus as a permanent fixture in the back seat of our truck. I began to wonder how hard it would be to find another seatbelt to replace the one I severed with a box cutter. I tried to see if there was an easy way to unbolt one side of the seatbelt (there isn’t).

It was a warm, humid day, and the truck’s engine was doing an admirable job of heating the garage so the point where we were sweating like…like…like people who sweat a lot (I don’t know; all I can come up with are comparisons that will offend someone). Frankly, we were out of ideas, and I was out of patience.

Working in a gas plant during summer breaks from college, I learned one lesson — when you’re stymied by a recalcitrant object, the solution is always simple: get a bigger hammer. So that’s what I did.

Not literally, of course; that would have been stupid. Satisfying, perhaps, but still stupid. But I did put on a pair of leather work gloves and started folding in those metal spines, heedless of any possible lasting damage (did I mention the $158.31?), until the circumference of the cactus was svelte enough to slide out of the grasp of the #@*% seatbelt…which, by the way, slid back in place just as if nothing had happened.

This sordid affair did have a happy ending, however. I was able to bend the spines back out to approximately their original position (the photo at the top of the page is the “after extrication” image and I think it looks fine, as metal agaves go). The cactus is now perched atop a tall planter near our front door, and Debbie has pronounced it well and good.

The truck’s upholstery has a few minor scratches but no puncture wounds, which is good, because I’d hate to think that a 12 year old pickup with 195,000 miles on it has any signs of aging.

But I have learned from this experience, and from now on, anyone dumb enough to steal a metal cactus out of our truck bed at Wal-Mart is welcome to it; I just hope they belt it in before fleeing the scene. 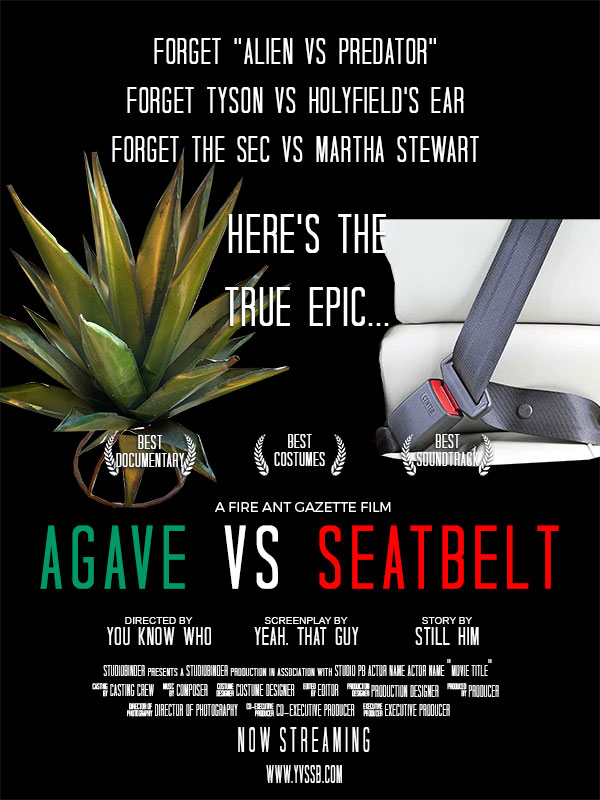