Hello, again (or hello for the first time if you’ve managed to avoid this destination up until now). Today is National Chicken And Waffles Day, and I was pretty much this many years old before I succumbed to the siren song of that delectable dish. Its origins are murky, and I did not find the concept at all attractive until about five years ago, when, operating under the relaxed inhibitions that come with a leisurely stay on Maui, I ordered a rather upscale version at the Wailea Andaz resort, and the stars suddenly shone a little brighter and the dolphins sang a little more sweetly and…well, you get the picture. (In case you’re contemplating booking a trip there just to partake, the Andaz no longer offers C&W — not to be confused with the musical abbreviation — on its menu. Didn’t want you to arrive there and have to immediately return home in abject disappointment…but, really, what else is there to do on Maui?)

Locally, my favorite chicken and waffles are served at Pecan Street Brewing in Johnson City. Their approach is firmly rooted in the sugary side of the C&W family tree, with sugared waffles and a side of homemade honey pecan syrup that will give your pancreas a hissy fit (Yes, I’m pretty sure that’s a legitimate medical term). Pair them with a hazy IPA, ignore the incredulous onlookers and the ladies on the fainting couch, and get after it.

I think I’m flinging a craving for chicken and waffles on myself, so I’ll be back in a jiffy…don’t go away.

Another item that I like is completely unrelated to chicken and waffles, although you might work up an appetite using it. It’s a kindling splitter from Northern Tool + Equipment. 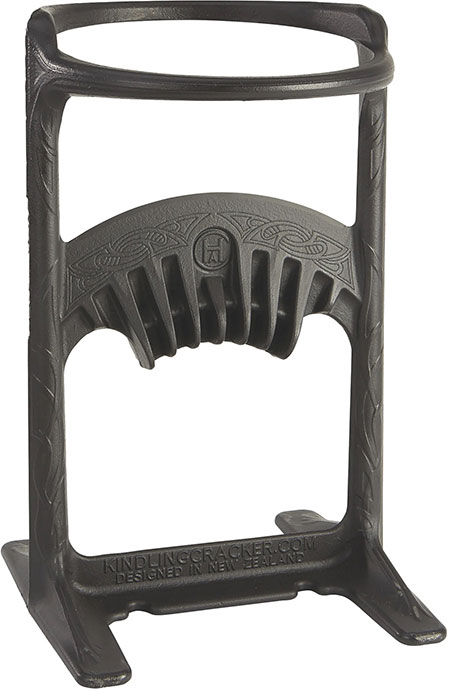 This 22-pound hunk of cast iron is drop dead simple to use. Stand a length of wood inside the ring, on the edge of the blade, and give it a whack with your choice of whackers. Depending on the type of wood and your whacking velocity/mass, the result will be two lengths of wood. Continue the whacking process until you have the desired sliveryness for your fiery purposes.

Now, I confess that when I first saw this implement in action, I swear I saw a petite grandmother-type tap an 8″ thick oak log with a teaspoon and it fell into two perfect pieces of firewood. Nothing could be further from the truth, so I’m not sure what I was watching. Unless you can swing a 30-pound sledge with John Henry-level force and accuracy, you’re not going to split oak or any other hardwood logs on this device. But if you’re looking to split some softer wood into kindling, it’ll git ‘er done. I disassembled a pallet and cut the 2x4s into 2’ lengths, and the untreated lumber was quickly converted into kindling.

So, while it won’t replace a hydraulic log splitter, it will quickly pay for itself vs. buying pre-split kindling at Ace or Home Depot.

I confess that I stumbled across the aforementioned kindling cracker via a Facebook ad, and I likewise landed on this next item in the same fashion, meaning that I’m now inundated with ads for similar items. That’s OK; I know how to hide them. But it was worth the inevitable annoyance to snag one of these NightBuddy LED headlamps. 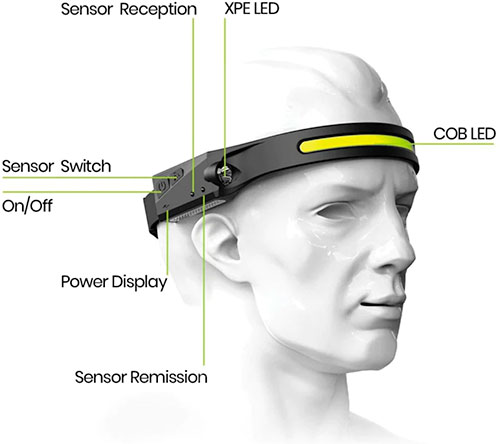 Actual photo of me wearing my NightBuddy™

I’m sure I don’t have to tell you, but I will anyway. “COB LED” refers to a chip-on-board LED, and “X-PE LED” is…well, TBH, I have no idea what it means, even after reading skimming glancing at literally three websites. It has something to do with something called luminous flux, but let’s just say that it’s a teensy-tiny flashlight that’s pretty darned bright, and leave it at that.

Now, the cool thing (but also potentially annoying thing) about the NightBuddy is that it has a motion detection capability that allows you to turn it on and off just by waving your hand near the sensor, so you don’t have to fumble for the on/off button. However, it also means that you can turn into a human strobe light if there are flies and mosquitos buzzing around, IYKWIMAITYD. Thankfully, you don’t have to activate the motion detection.

There are a number of other features that may or may not interest you; feel free to browse their website. I’ll just leave you with this caution: this little sucker is so bright that you really want to be careful who you point your head at. Don’t ask me how I know that. Seriously. Just don’t.

Let’s shift gears a bit, and move from hardware to software (and we’ll eventually slide into weirdware [a term I thought I just made up except Google gives 74 reasons to prove that there’s nothing new under the sun]).

I really like an app called Image Size (for iPhones and iPads). It’s sort of a one trick pony, but what it does, it does extremely well: it resizes images (d’oh!).

We have very slow internet, and as phone camera resolutions continue to increase and photo size balloons accordingly, emailing or texting photos can be problematic. Image Size solves that problem by providing a very flexible interface for reducing the dimensions of a photo or other image.

I took a screenshot (see below) of the Image Size app interface, ready to process a photo I took yesterday. You can see outlined in yellow the input areas to specify the reduced size of the photo, which was originally 4032×3024 pixels or 2.1 megabytes. I reduced the dimensions to 1000×750 pixels, which reduced the corresponding size of the file to 227 kilobytes or about 11% of the original size. 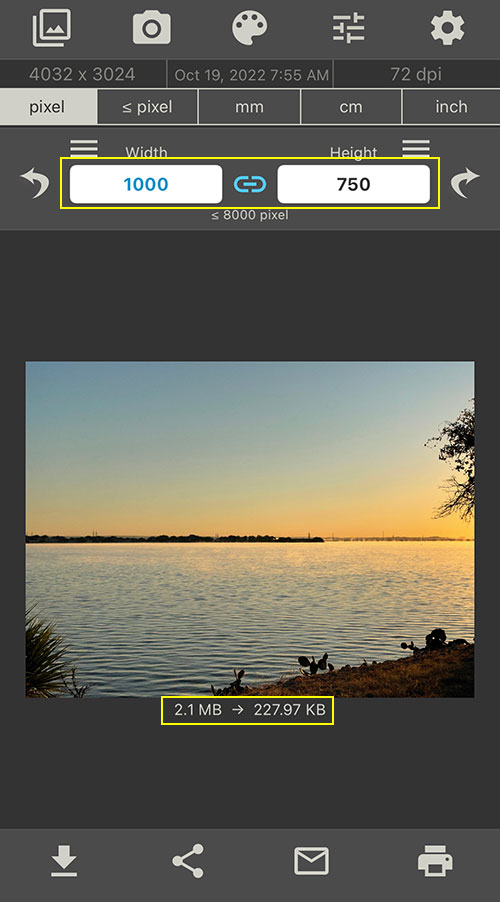 Now, a reduction in size like this does mean that you lose some detail in the image, but if your goal is simply to quickly share a picture with someone, that’s not generally a big deal.

I mentioned above that Image Size is a one trick pony, but that understates its true capabilities. It has some pretty sophisticated editing features, similar to what you have in Apple’s Photo app. There’s also quite a bit of flexibility in file creation and management via the app’s settings. And, finally, it gives one-click options for sharing, downloading, or printing.

Image Size is a free app in its ad-supported incarnation, but for a one-time payment of $15, you can remove the ads forever. It’s really a pretty cool tool.

I used the term “weirdware” for this next…something, and while that’s apparently not an original description, I think you’ll agree it’s an apt one.

The Wall Street Journal’s tech columnist, Joanna Stern, has an in-depth review of a couple of artificial intelligence-powered text-to-art generators, and it’s a fascinating look at developing technology which, I’ll admit, has some intriguing possibilities. At the same time, in their current beta states, they strike me as solutions in search of problems.

I couldn’t resist trying out one of them, called DreamStudio. That link takes you to a login page…you have to set up a free account…which then takes you to the image generation dashboard. There you can input the dimensions of the image you want to create, and specify some parameters that control how the AI engine should process the input that you’ll provide in order to create the image. At the bottom of the dashboard is a input box where you type a brief description of your desired image.

I decided to give the AI a whirl, so I input an ant typing on a keyboard and hit enter. This is what popped up: 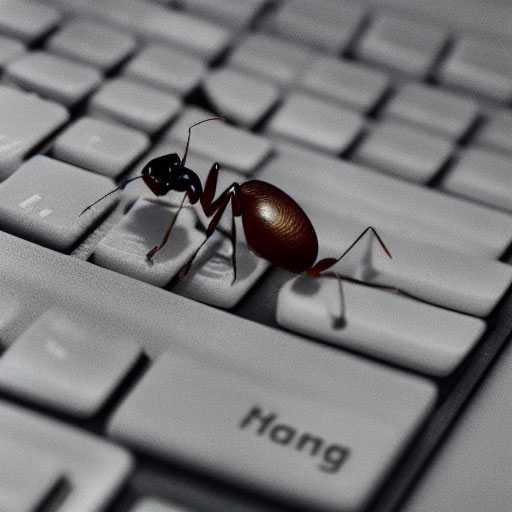 This has a Twilight Zone vibe, doesn’t it?

OK, so it’s not exactly photorealistic…and barely imagination realistic, but it’s also not totally off the wall. I decided to try again, this time inputting an angry ant typing on a keyboard. The result was even weirder: 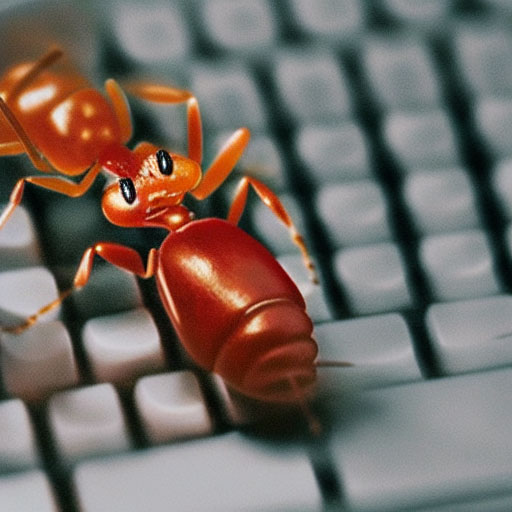 What the heck is going on here?

I’m not sure what I’m looking at here; I certainly don’t know what the artificial “intelligence” ghost is trying to tell me.

I gave it one more chance, this time adjusting some of the [arcane, to me] parameters to rev up the AI engine a bit, and here’s what it spit back at me: 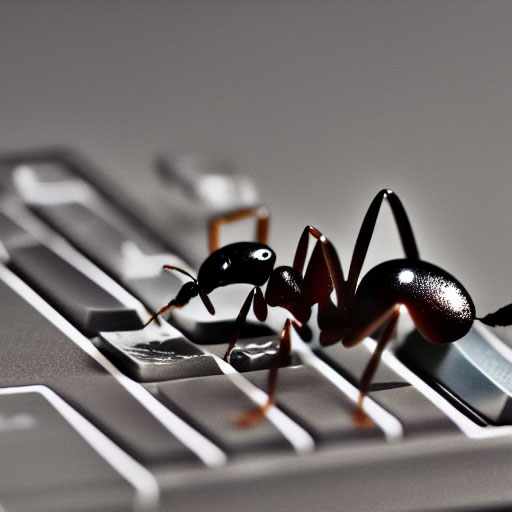 Well, it’s a bit less ambiguous, but not any more angry or typey.

Based on some of the demos, folks with more understanding and skill with the application have generated some pretty impressive images, but those same folks probably have the chops to do even better things by themselves without relying on a ghost in the machine. Still, it’s sorta fun to play with.

Note that the DreamStudio Beta is pay-to-play, although you get 200 free “credits” to start out with, and the dashboard keeps a running tally of how you’re expending them. The larger the image you want to create and/or the more hoops you want the AI engine to jump through, the more credits the process will cost you. The images I created burned through only about 1 credit each (and the results demonstrate my cheapness, I guess). You can buy additional credits for a buck each, in batches of 10.

Incidentally, any images you generate via DreamStudio are deemed to be in the public domain. IOW, you don’t own a copyright to them, and they may be freely “borrowed,” edited, shared, and copied, even for commercial purposes, without asking your permission. That’s not a deal-killer for me, but YMMV.

Now, DreamStudio isn’t the only AI-powered image generator. I’ve played around with another one that was reviewed by Ms. Stern in her WSJ column, and it shows more promise — at least for my purposes — but I think I’ll save a review for another post. Stay tuned…but for a hint, look at the banner at the top of this post!