Skip to content
How many Aggies does it take to change a light bulb?

OK, let’s get something out of the way first. No one had to call 9-1-1, but rest assured that MLB had her dialing finger at the ready.

A bulb in one of the recessed lighting fixtures in our living room burned out over the weekend. No big deal, right? After all, it’s only FOURTEEN FEET OFF THE FLOOR. Fortunately, I have one of those extendable light bulb unscrewer thingies and it easily reached and removed the floodlight. Well, it removed most of it.

You may have encountered this situation before. You start unscrewing a light bulb, feel a light snap, and the glass portion of the bulb comes out while the base remains firmly attached to the fixture. This can occur for any number of logical reasons. The bulb may have been screwed in too tightly, or some slight oxidation over time caused it to bond with the fixture, or the universe despises you and seeks every opportunity to demonstrate it.

Rather than attempt to extricate the frozen base immediately, I chose to take a couple of days to strategize. I did mention FOURTEEN FEET, right? Of all the phobias I don’t have, acrophobia isn’t one of them. I needed time to decide whether living in the dark was really such a bad option.

A couple of days later, I resigned myself to doing what needed to be done, and that didn’t include selling the house and buying one with newer light bulbs and lower ceilings. I was fully prepared to bring in the extension ladder and clamber up there to remove the stuck bulb base and put in a new bulb.

But first…why not use the aforementioned light bulb unscrewer thingie’s rubberized broken bulb socket remover attachment (it’s genius, really; genius!). Granted, it hardly ever works, but when it does, it’s magic. So I attached it to the pole — it vaguely resembles an invasive medical apparatus — and inserted it in the light fixture. Miraculously, the stuck base began to loosen until it was finally freed and … came loose and laid trapped inside the fixture.

So, naturally, I began to attempt to fish the bulb base loose with the pole, because I couldn’t install a new bulb until it was removed. I eventually succeeded in knocking it out of the fixture, where it fell to the floor, sending tiny shards of glass everywhere.

At this point, it might be helpful to describe the basic layout of a typical recessed light fixture, in case you’ve never had the pleasure of inspecting one up close and personal. The fixture consists of two parts, one functional and the other decorative. The functional part attaches to a beam above the ceiling and is what the bulb is screwed into. The decorative part, also known as the trim, consists of the baffle (the smooth backing behind the bulb) and the trim ring (the circular piece that rests flush against the ceiling and covers up the edges of the hole where the fixture is mounted). The trim ring may or may not be permanently attached to the baffle. This is a seemingly trivial detail, but it’s actually quite important for this story, because…

As I knocked the loose base of the bulb from the ceiling, the trim ring came down with it, exposing an ugly hole. I might as well have aimed a 12-gauge shotgun at the bulb and fixture.

After all of that effort, I was still going to have to get on the ladder to see if and how I could repair the fixture. I’ve replaced a recessed fixture baffle before and it’s not a huge deal, unless you’re FOURTEEN FEET OFF THE FLOOR. Also, I’d have to make the twenty mile round trip to Home Depot to get another baffle.

I put the ladder in place and asked MLB to brace it. I slowly and sweatily crept up the ladder and managed to unhook the baffle and remove it. As I inspected it, a happy realization began to dawn on my nervous mind: the trim ring had not broken off the baffle. It simply slipped over the top of the baffle, meaning that I wouldn’t have to install a new one after all. Perhaps the universe didn’t hate me after all; perhaps I was just unlikeable.

Installing a baffle is a (theoretically simple) matter of attaching two spring-loaded hooks into microscopically small slits in the side of the fixture, using only harsh vocabulary as a tool, and without the benefit of sight and while FOURTEEN FEET IN THE AIR. But I eventually succeeded, and the installation of a new bulb was an inconsequential afterthought.

I would feel much better about all of this if I didn’t know that there are six other similarly-situated bulbs of the same approximate vintage, shining down malevolently at me.

Oh, and did I mention that two of them are SEVENTEEN FEET OFF THE FLOOR?! 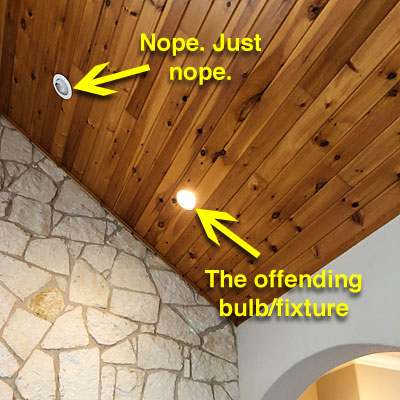