This is the third in a series of four posts spotlighting music from the Fort Stockton (Texas) “Pride of Pantherland” High School band. [Jump to: 1966-1967 | 1967-1968 | 1969-1970] These posts will span the school years from 1966-67 through 1969-70, corresponding to the time yours truly (and MLB) spent in the band. I’m doing this as a way of preserving some of the musical memories that were made in those years. I’m sure that not everyone who was in the band at that time kept the record albums that were issued after each spring concert.

I came into my own during my junior year (1968-1969). I challenged for first chair clarinet (no more playing the second parts for me!) and again made the All-District band. This was to be Mr. Jarrell’s last year in Fort Stockton. It also wasn’t the best year for the band overall, as we failed to win Sweepstakes.

The first moon landing occurred in July, 1969, and I remember it because I and two bandmates — Tommy Schlegel and John David Evans (RIP) — drove my parents’ 1958 Ford (without a/c) to Norman, Oklahoma to visit Mr. Jarrell. We watched the landing on his TV. [Ed. They landed on the moon, not on his TV.] On the return trip we made it as far as Penwell, between Monahans and Odessa, before the alternator gave out and we had to call our dads to rescue us. Good times.

Here are photos of the band’s 1969 album front sleeve and the record label. The song I’ve selected from this album is in a different vein than the first two I picked. España Cañi (translated as “Gypsy Spain”) is a Spanish paso doble, or two-step (not to be confused with the country dance of the same name). It was composed by Pascual Marquina Narro (also styled as Pascual Marquina) in the early 1920s. It is sometimes referred to as the Spanish Gypsy Dance, and it’s still frequently played in Latin paso doble dance competitions. 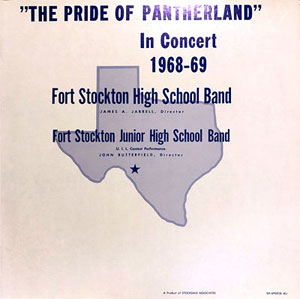 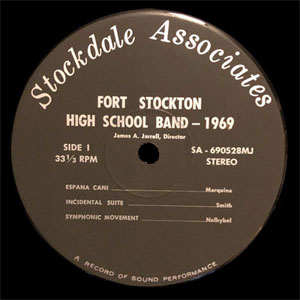 My recollection is that España Cañi was a lot of fun to play. Also, I don’t recall ever hearing anyone in Fort Stockton pronounce Cañi as anything but Connie. So much for the Latin influence in West Texas. As you can see on the label above, the tildes didn’t make the cut for inclusion in the song title. (Also, the “locator star” on the album cover is off from the actual location by approximately 150 miles. Chalk it up to either artistic license, or failure to geographi.)