This is the second in a series of four posts spotlighting music from the Fort Stockton (Texas) “Pride of Pantherland” High School band. [Jump to: 1966-1967 | 1968-1969  | 1969-1970] These posts will span the school years from 1966-67 through 1969-70, corresponding to the time yours truly (and MLB) spent in the band. I’m doing this as a way of preserving some of the musical memories that were made in those years. I’m sure that not everyone who was in the band at that time kept the record albums that were issued after each spring concert.

One could make the case that 1967 was the greatest year in music history. Groups like Cream, the Rolling Stones, the Jimi Hendrix Experience, the Doors, and Jefferson Airplane populated the charts, and the Beatles released Sgt. Pepper’s Lonely Hearts Club Band. All good stuff, but in Fort Stockton, the Pride of Pantherland was continuing its hot streak.

Band in my sophomore year (1967-1968) was more comfortable. Mr. Jarrell, our director, was a stern but capable leader, and I was much less intimidated by him.

I also improved my skills during the year, and made the All-District band for the first time. I don’t have much natural musical talent but what I had back then was the ability to actually enjoy practicing. And it’s a good thing I was improving in band because I was a lousy athlete.

Here are photos of the band’s 1968 album front sleeve and the record label. The song I’ve selected from this album is Chester, composed by William Schuman who, according to this article, won the first Pulitzer Prize for music composition, and also received a Kennedy Center honor in 1987. The piece was written in the mid-50s and the tune is based on a 1778 anthem purported to be sung around campfires and adopted as a marching song by the Continental Army during the American Revolution. Schuman died in 1992 at age 81. 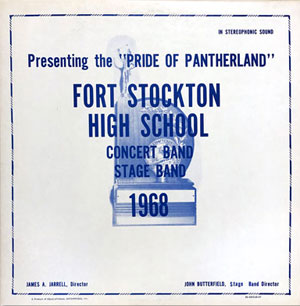 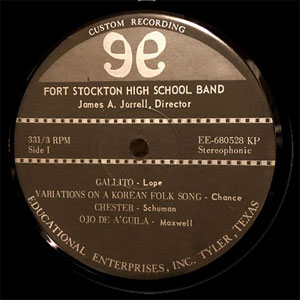 As before, here’s the digitized version of the original vinyl recording. The first two minutes are pretty sedate, but the notes come in vast bunches shortly thereafter. We must have impressed the judges; for the second consecutive year, the band won Sweepstakes.