One of the [many] features that attracted us to the house we bought a few years ago was the massive stone wall in the living room/den. The fireplace centered on that wall was well-used, judging by the soot marks on the pale firebrick. It’s a wood-burning fireplace; our house is all-electric except for the cooktop, which is fired by propane. (None of the homes in our city have natural gas. I think this is because the rocky terrain makes installing gas lines prohibitively expensive.)

After we moved in, the fireplace became simply a non-functioning architectural feature. We tried to enliven it with an electric fake fire installation (think gas logs without the bona fides), which ended up just looking kind of sad and underachieving, in a Charlie Brown Christmas tree sort of way.

We (and by “we” I obviously mean The Other Person Living In This Home) tried cleaning the firebrick. That effort was met with limited success: the fireplace looked better but it remained, well, sooty. We lived with the semi-sooty, inadequately fake-fired “fire”place for two years.

Then, one day, “we” decided that a change was needed, and would be implemented. The first order of business was to spruce up the firebrick. After some research, and a fruitless visits to big box stores, we found BrickAnew (“Your Fireplace Transformation Store”) and its high temperature paint. It was touted as being the solution for concealing creosote and soot stains, and able to withstand temperatures up to 1200°F. That seemed pretty hot, although I have no idea how hot a typical wood fire gets. (Ed. – It’s pretty hard to find a firm answer to that question, although the Google-sourced consensus seems to be that wood fires can reach 1100°F. That doesn’t leave a lot of wiggle room.) We ordered a couple of cans.

When the paint arrived, we discovered that the instructions stated that the paint needed to be cured at 500°F. Welp. Here’s another temperature-related conundrum: how does one do that in a fireplace? My solution was to buy a Furno 700, which sounds like something out of a National Lampoon movie starring Chevy Chase. In a more mundane reality, it’s a variable output heat gun that allows you to dial in a pretty specific temperature…up to a face-melting, insurance-adjuster-head-shaking 1300°F. 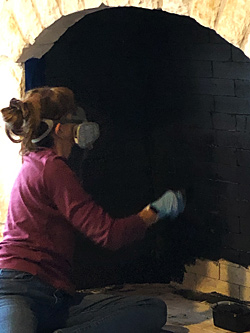 We took seriously the warning about providing adequate ventilation due to the radioactivity caused by the presence of semi-depleted plutonium in the paint. I kid. It’s just some minor hallucinogenic – or is it carcinogenic? I always get them confused – compounds. Anyway, we opened doors and windows for cross-ventilation (and, of course, the weather that day was as quiet as Beto’s fundraising phone line) and turned on a floor fan plus dual ceiling fans. Also, I insisted that the paintress, aka TOPLITH aka MLB don additional protection in the form of a respirator. She got to work and was finished with the painting in just over an hour.

We let the paint dry for a few hours, then it was my turn. I fired up the Furno (not literally, of course, although alert Gazette readers may have been around here long enough to know not to take anything for granted when it comes to me setting things on fire) and got work. I had no idea how to actually cure the paint at the recommended temperature, so I set the heat gun on 750°F and commenced to play it slowly over each row of newly-painted bricks and it soon became obvious that I had made a grave tactical error.

It wasn’t that the heat gun was ineffective; it’s just…well, watching paint dry is an intellectually stimulating activity of epic proportions compared to helping paint dry. And while the Furno isn’t a particularly heavy appliance, it also doesn’t have a self-driving mode complete with autonomous hovering capability. IOW, this was a boring AND tiring endeavor. I think it took me longer to allegedly cure the paint than it did to actually apply it. I say “allegedly” because who knows whether it actually worked.

So, if you stayed with me this far – bless your heart – I’m sure you’re anxious to see how things turned out. Below is our slick slider graphic…just pull the yellow bar to the left to reveal the “after” part of the comparison. 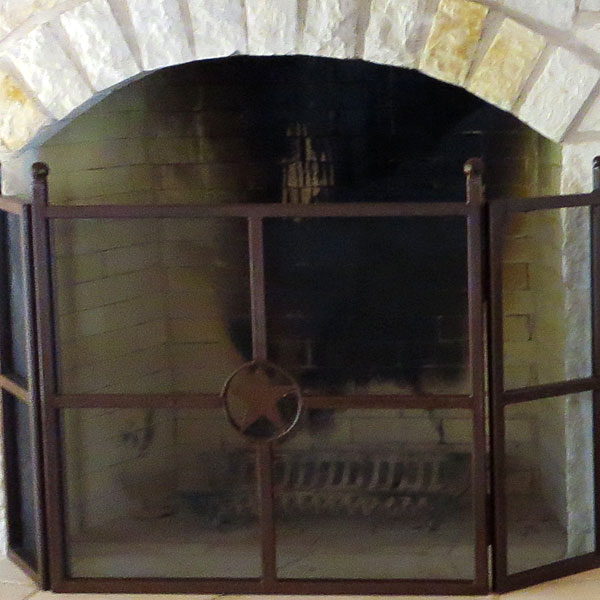 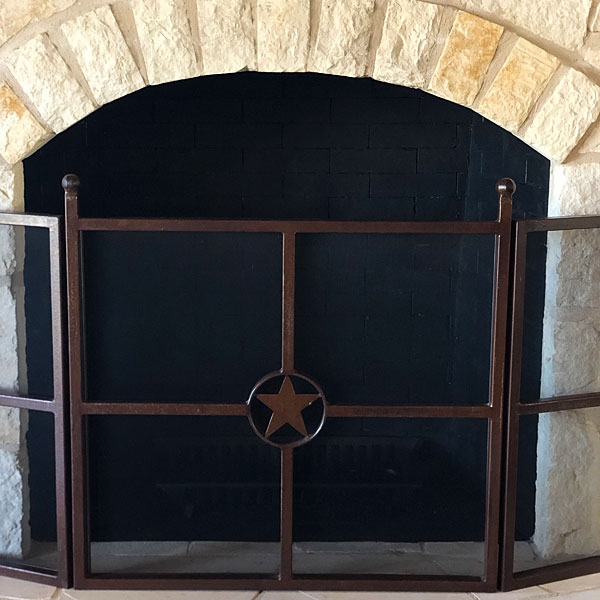 I’m certain you’re also eager to find how the paint handled an actual fire…as were we. Since we didn’t have any actual firewood, I broke up our dining table…ah, again, I kid. I went our local Ace Hardware and bought a couple of boxes of that manufactured firewood consisting of particles of orphan timber bonded by the tears of earnest 16-year-old environmentalists, and set a couple of them to blazing. I don’t know how hot those things burn, but I’m happy to report that the paint didn’t flake off like snow from Hell, and that’s a major win in my book. I’ll let you know if a big fire using actual wood has a different result, assuming we ever get anymore winter weather here in the Texas Hill Country.