Howdy, y’all. I see that it’s been awhile since there was anything new on this blog-like thing, and you can either thank me or accept my apology, depending on your perspective.

Anyway, today is National Great Poetry Reading Day, and in recognition of this hallowed event, I present the following in honor of Joyce Kilmer, who doesn’t deserve to be lampooned for his name nor his simplistic poetry, because he was killed in action during WWI. But, admittedly, he was sort of a one-hit wonder of a poet, because I suspect most of us only remember this… 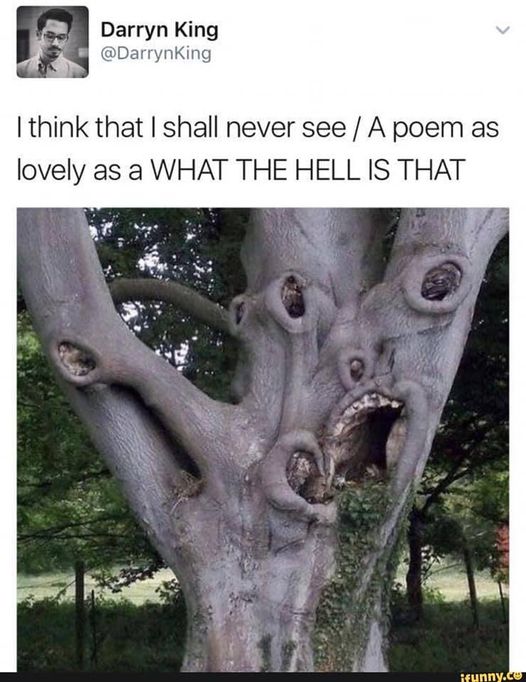 Much of what we’ll cover today will be mocking other people, or companies, or apps, or…well…there are just SO MANY things nowadays that deserve mocking.

For example, the following showed up on my Facebook feed a while ago. Even though a lot of people rose to the challenge, they were too late; the original poster had already died of a self-inflicted wound. 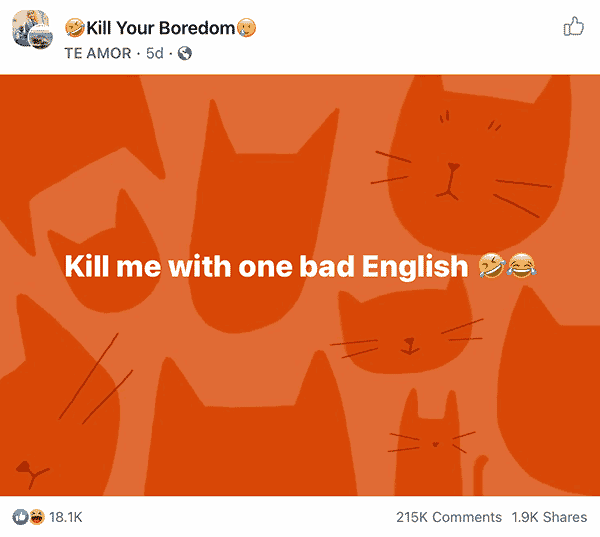 We interrupt your regularly scheduled programming for this important, non-redacted and mostly accurate transcript:

Me: I don’t know if he’s really getting to be absent-minded. He sure remembered a lot of historical dates and genealogy.

Her: Yeah, but most of what he remembered was past stuff.

Me: You mean, as opposed to remembering what will happen in the future?

Me: You know I’m totally blogging this, right?

We now return you to your regularly scheduled programming.

I’m pretty sure I’ve previously bored you with my tales of woe concerning our terrible, horrible, no good, very bad internet service. Due to a combination of factors, all of which are beyond our control (other than taking a chain saw to multiple 100-year-old trees), we have to use a satellite internet service. The speeds may be slow, but at least the data is capped…meaning that once we hit that cap, the speeds get even slower. And while I realize that it’s only logical that the company has a way to measure our data usage, I can’t help feeling that they’re being just a tad too strict in making sure we don’t go over our monthly allotment: 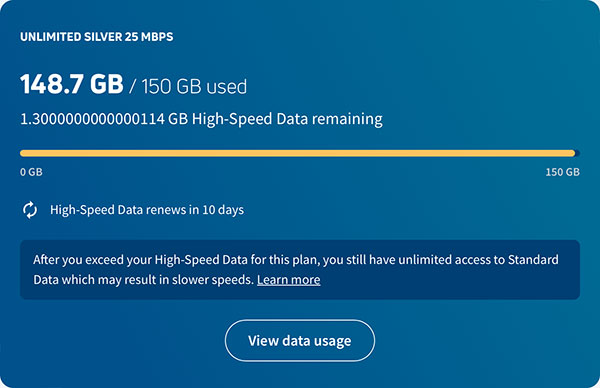 It hurts my head to even contemplate figuring out what fraction of a gigabyte is represented by 16 decimal places. Feel free to enlighten me.

In any event, we’ve started using T-Mobile’s “5G Home Internet,” and so far have been pretty happy with it. After working out a few introductory bugs, it seems stable, and the speeds are faster than Viasat’s (although not significantly so)…but most importantly, there’s no data cap and the price is less than 1/3 that of Viasat’s service. We’re not quite ready to drop Viasat completely — it’s only been a couple weeks of living with T-Mobile — but that’s the direction we’re heading.

In closing, allow me to recommend to you the following important field guide: 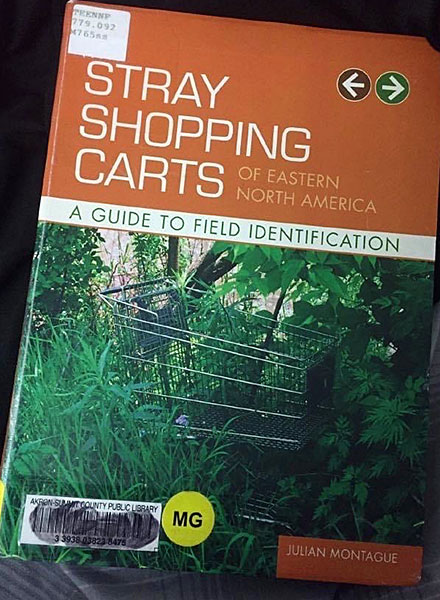 If you’re an aspiring author who is bereft of ideas, or for whom plagiarism is a distant Plan B, take heart in the fact that this is an actual, bona fide, 100% purchasable tome with an actual ISBN number and a Dewey Decimal classification* that it shares with equally luminous publications such as Ansel Adams In Color (by Ansel Adams), 100 Photographs That Changed The World (via Life Magazine), and Photographs Annie Leibovitz 1970-1990 (by Annie Leibovitz). Tall cotton, that company.

And in anticipation of your question, no, I don’t actually have this book in my library. I’m waiting for its soon-to-be published companion, Walmart Shopping Bags and the Unusual Places You Can Find Them.

*Yes, I actually assigned the Gazette’s crack research team the task of looking up the Dewey Decimal category shown on the cover of this book. We do not believe in journalism shortcuts.