Spring in the Texas Hill Country is accompanied by a lot of activity in the animal kingdom. Here are a few things that have shown up on my radar lately.

Everything I Know Is A Lie

Alert Gazette readers will no doubt recall that I’ve oft been an enthusiastic advocate for the frequently maligned opossum (aka, “possum,” albeit incorrectly), primarily due to their reported role as tick eaters. This post is but one example. But I recently ran across a claim that rocked my world.

Clicking that image will take you to a Facebook post in which several of my misconceptions about opossums are debunked, including their value in keeping the tick population under control. It also contains a link to this Field & Stream article which focuses on the study that gave rise to the tick-eating claim…and its lack of scientific rigor.

And if that wasn’t bad enough, opossums have been known to carry diseases such as leptospirosis, tuberculosis, relapsing fever, tularemia, spotted fever, toxoplasmosis, coccidiosis, trichomoniasis, and Chagas disease. Sure, they are resistant to rabies, but you might think twice before cuddling a wild one.

Regardless, I’m still a fan of Pogo.

And speaking of Pogo…

According to this report, sightings of porcupines in our area are on the rise. However, in our little neighborhood, I’m aware of only one recorded sighting, and that happened back in 2020. Here’s a screenshot from a short video taken by a neighbor showing the critter ambling toward the creek. This is a pretty mangy example of a porcupine; I don’t know enough about them to guess if this one was sick, going through a phase, or, well…just ugly. 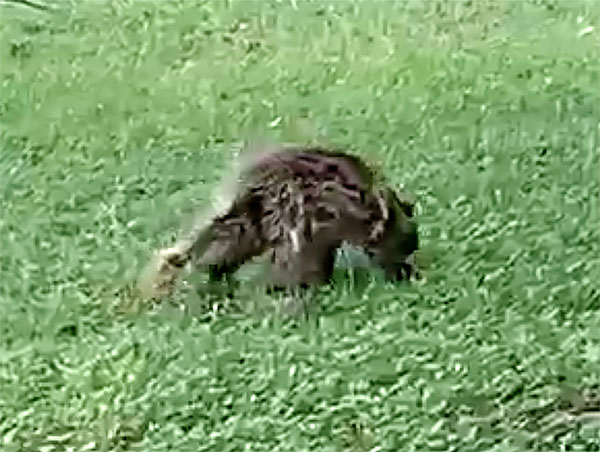 A few other things I didn’t know about porcupines, from the above-linked article:

Incidentally, the reference to Pogo above is because one of the recurring characters in the comic strip is Porkypine, described as a “cynical philosopher and poet” known for his — wait for it — prickly personality.

He Forgot He Was a Bunting, Not a Butting

Shoutout to my pal Sam for inspiring the headline.

We were sitting in our living room last Thursday when we heard a familiar *thump* coming from the patio. I immediately jumped up to see what kind of bird ran into the window; these collisions happen several times a week.

I was expecting to see a hummingbird, or perhaps finch of some flavor. I was not expecting this. 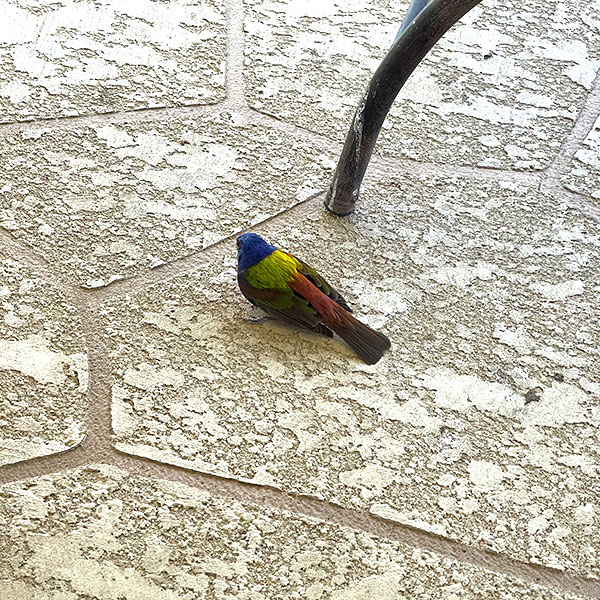 That gorgeous bird is a male Painted Bunting. They’re not exactly rare in these parts, but we’ve never seen one this close to our house. They’re very skittish birds, and I’ve never been able to get a clear photograph of one…until now. 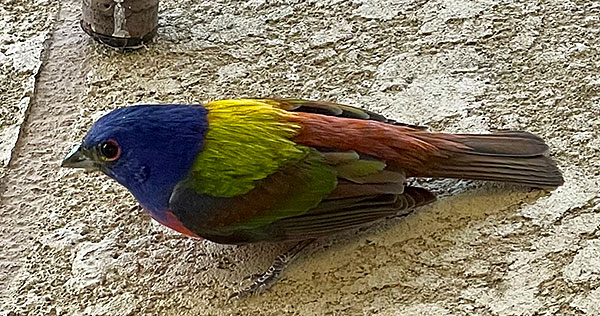 Of course, all things considered I’d rather have witnessed this bird in its normal behavior instead of being mildly dazed. And fortunately, “mildly” was a good description, as he flew away as soon as I opened the sliding glass door to get a closer look.

This is the time of the year when snakes start appearing in our neighborhood. I shared with you last Sunday an encounter with a western ribbonsnake, and this week, we’ve seen three De Kay’s brown snakes (Storeria dekayi), one in the back yard and two in our front courtyard.

De Kay’s brown snakes are quite common in Central Texas. They’re nonvenomous, dine on snails, slugs, and earthworms, and are shy and often difficult to spot. They’re quite tiny and mild-mannered, but hilariously pugnacious when cornered.

To give you a sense of scale, here’s a photo of one of the snakes in our courtyard exploring Debbie’s finger, via its flicking tongue. (I converted the color photo to grayscale to heighten the sense of drama and danger. Did it work?) 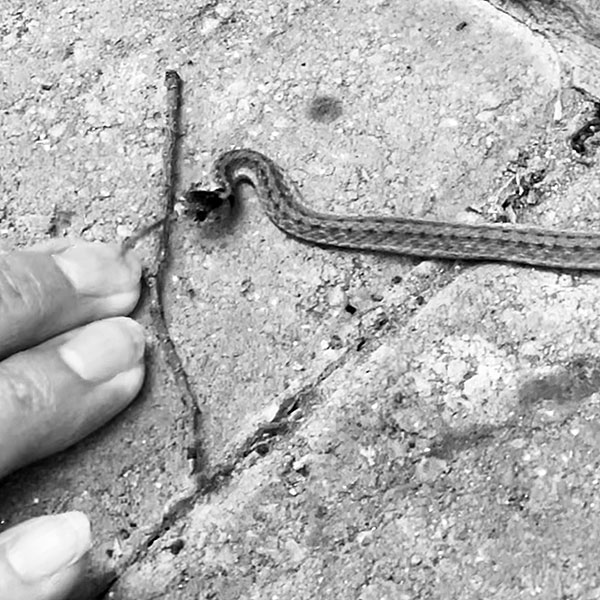 The next photo is the snake that was in our back yard. We played around with it a bit, trying to coax it out of the grass and into the flower bed so it wasn’t in danger of being stepped on. The eight-inch-long serpent moved into “big snake” mode by rearing back and striking — again, at Debbie’s hand. That has about as much physical impact as a fly landing on your hand. 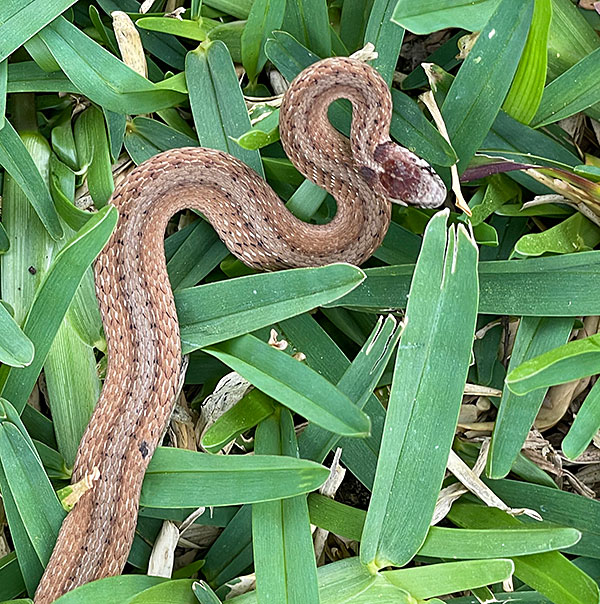 I have one final snake photo to show you, and it’s a throwback from almost four years ago. If you’ve been with me that long, you may recall my account of a battle between a woodpecker and two rat snakes intent on raiding the bird’s nest. Spoiler alert: they were successful, but the woodpecker inflicted some pain on one of them.

I ran across the following photo while looking for something else. As I recall, this rat snake was peering out of the woodpeckers’ home in a tree, trying to decide if it was safe to exit, or if it would be a victim of yet another dive bombing by the angry bird.

I actually had one additional snake encounter in our courtyard, but it moved and disappeared into a pile of leaves so quickly that I’m going to classify it as an unconfirmed sighting of a nonvenomous smooth earth snake (Virginia valeriae). These are tiny wormlike snakes (usually less than 8″ long). Their diet consists mainly of earthworms and small, soft-bodied arthropods like mites, ticks (until proven otherwise!), and spiders.

Now that I know that there’s one in the courtyard, I’ll try to be better prepared with a camera and perhaps get a photo to share.