Hey, there! It’s been a while since we’ve met on these pages; much has happened since our Great Porcupine Encounter that has distracted me from doing any thinking, much less writing.

About a week ago, I entered my septuagenarian experience with a whimper, not a bang, experiencing a series of health challenges which are continuing and which I may or may not write about later. Anyway, my advice is that if you have the opportunity to skip turning 70, take it.

This is the point where I’d normally say something like, enough about me, but you know me better than that. It’s always about me and my exciting life and adventures and…I almost typed that with a straight face.

Most blogging is inherently narcissistic, since it presumes that the writer’s experiences and observations will be mesmerizing and enlightening to visitors, but at least I’m self-aware enough to realize this, and to at least attempt to provide some stuff that’s entertaining and educational (terms which I use very loosely, of course). So, let’s see if I can put that into practice starting…now.

Debbie and I managed to get in a whirlwind tour of North and East Texas, visiting with extended family, most of whom we hadn’t seen in years. Our first stop was in Denton where we met one of Debbie’s cousins and his wife for supper at a downtown burger joint.

Now, I don’t drink a lot of beer but something on their beverage menu caught my eye and I couldn’t pass it up, for reasons that should be immediately obvious. Plus, it’s all about the research. 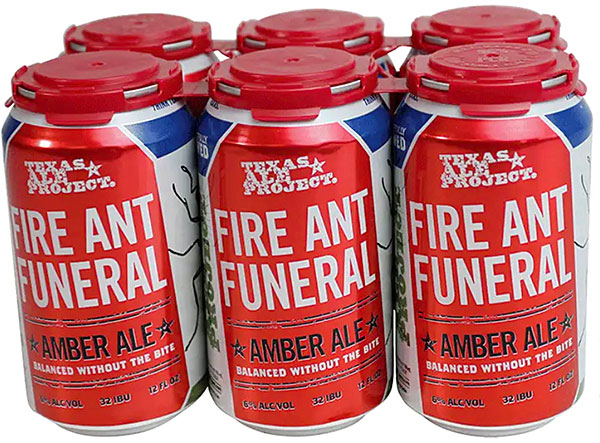 I have so many questions about the name…

This amber ale comes from a Dallas craft brewer called the Texas Ale Project, which confidently, albeit without convincing proof, bills itself as “the best craft beer in Texas.” But I’m not here to discuss the merits of the beer itself nor of the brewery; I just want to know what they’re implying by naming this brew…especially since one side of the can reads R.I.P. you devil bas****s (this is a family blog, you know).

Should we be pouring cans of the stuff onto fire ant beds to dispatch them to that Great Mound in the Sky? Or should we just drink enough so that we don’t care? And the R.I.P. could imply a certain tenderness toward their little anty souls.

In any event, I am a bit envious of the tagline “Balanced Without The Bite” as I might have stolen borrowed it for this blog in an earlier life, as an aspirational caption even if not based in reality.

Ever wonder how an armadillo behaves when it’s at the mouth of its burrow and it suspects a human-type person is nearby? Well, wonder no more. [Heads-up: This is the educational part of the episode.]

This is one of three young armadillos I wrote about a few weeks ago. They’re getting bigger and more wary…harder to sneak up on. They’re also getting more destructive.

I’ve tried a lot of things to keep them out of our back yard (there’s no way to protect our front and side yards, but they seem to prefer the back one anyway). Some ideas have been better than others; using bags of mulch to block access to a gate wasn’t my finest moment. 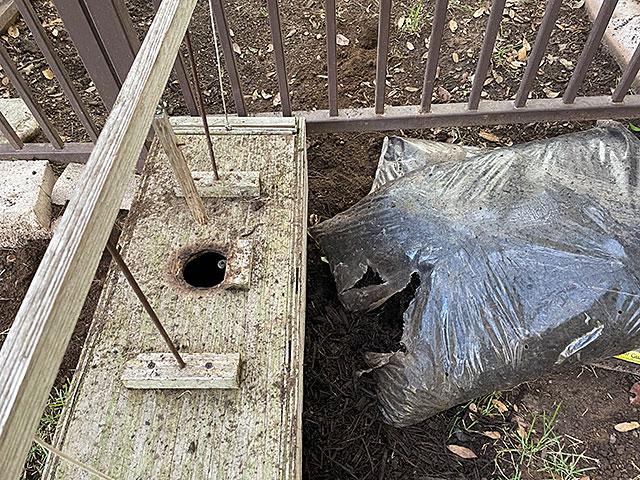 However, you may notice that the trap is closed, meaning that I did indeed capture the vandal…or at least one of them. A night or two later I caught another one, so here’s the current count (since 2017, for you who are new to these pages):

I suppose I should forthwith simply show the armadillo count since I’ve stopped trying to trap the other critters (except for the T-Rex; it’s always open season on that bad boy).

I’ll share one last, brief armadillo-related video, although this one is not really about the little armored guy…it’s about golf.

I was videoing the subject in its usual vacant lot haunt when our intimate reverie was interrupted by a golf ball flying overhead and landing a few yards ahead of us. I didn’t catch the ball on the video, but you can clearly hear the landing.

Now, someone is a heck of a driver, length-wise, because the tee box is a good 200 yards from where I was standing, with a solid line of very tall trees in the way. But what they had in power, they lost in control because that had to be a slice of epic proportions (assuming it was a right-handed golfer).

Anyway, make sure you have the sound turned up on this 8 second video.

I never did find the golf ball; I assume it bounced into the creek. The armadillo also disappeared shortly thereafter.

Remember up there at the beginning when I said my blogging goals were to educate and/or entertain? Well, here’s the “entertainment.” Have a great Independence Day celebration…stay safe, stay healthy…stay cool.