“Neighborhood” might be stretching it a bit given that the subjects of this post range in location from our front door to almost 300 miles distant. But in the cosmic scheme of things it doesn’t matter, right?

Let’s do the far away one first. Last month Debbie and I visited family in the exotic East Texas town of Mineola. (It really is a cool little burg…not easy to get to if you require an all-interstate-highway experience, but worth the effort to visit.) While we were there, we toured an under-construction house belonging to one of Debbie’s relatives, and we noticed a bird nest in the electrical panel in the back of the garage. It was not vacant. 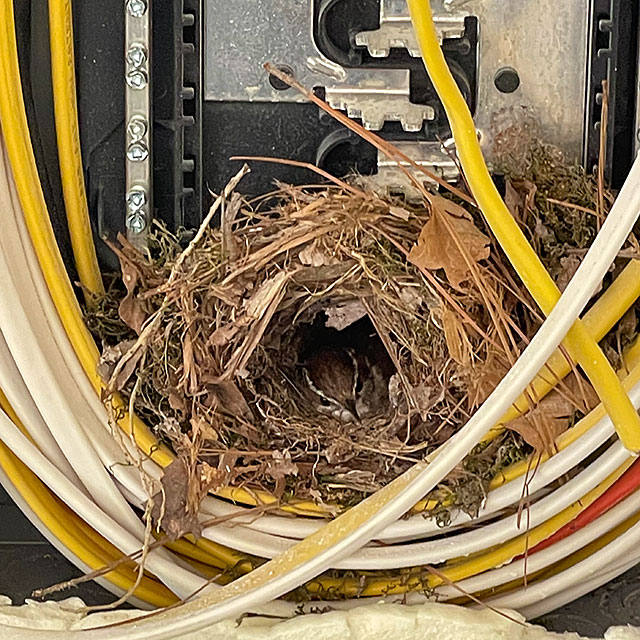 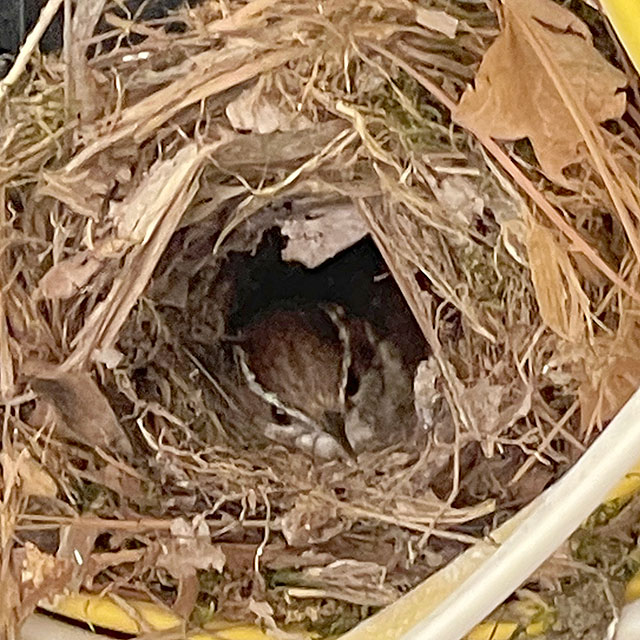 We startled the nesting bird, and she in turn startled us by bursting out of the nest and away from the garage. Here’s what she was guarding. 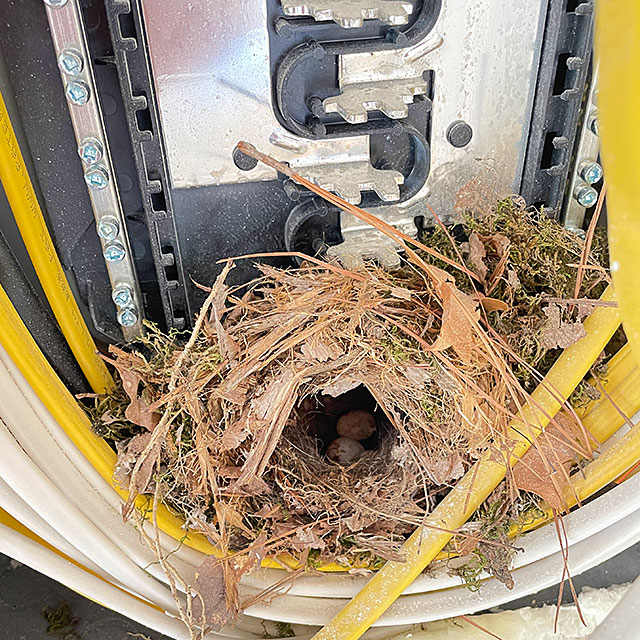 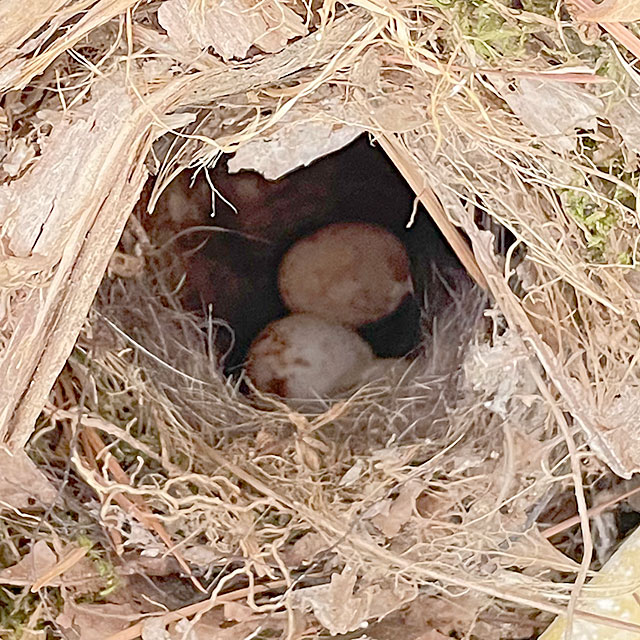 I believe this is a species of wren, possibly a Carolina wren (Mineola is near the western edge of its rather extensive range). They’re known to build nests in strange locations like this one.

I find it interesting that a bird would choose a busy — and accessible — location like an active construction zone to build a nest and lay eggs. I trust that it and the workers have reached some sort of accommodation…but at some point in the process, that electrical panel is going to present a serious issue. Both the incubation and nestling periods are short, but there’s still about a month of time required to get the eggs hatched and the young’uns out on their own.

Our next stop brings us back to Horseshoe Bay, but not precisely to our neighborhood. Alert Gazette readers will recall our porcupine encounter during a morning run on a long spit of land a few miles from our house.

A few days later, we returned to that same spot for another early run, and while we didn’t get to reconnect with our prickly pal, we were greeted by the sight of a gaggle of Canada geese. They initially were floating placidly in the south side of the peninsula. 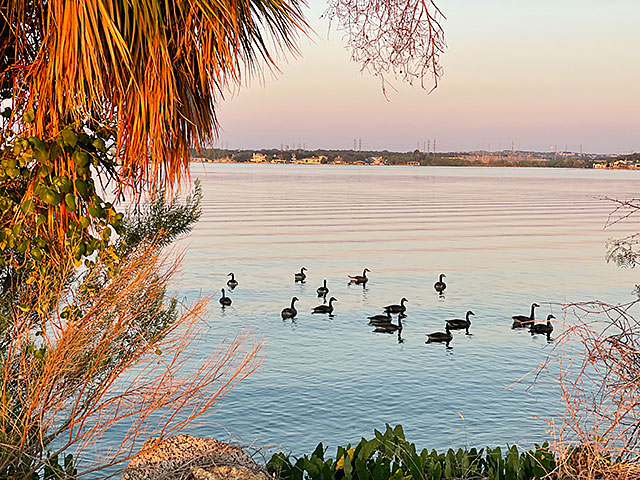 This was near the beginning of our run. We continued down the gravel path to the lighthouse and when we returned, the geese had waddled up onto the land. 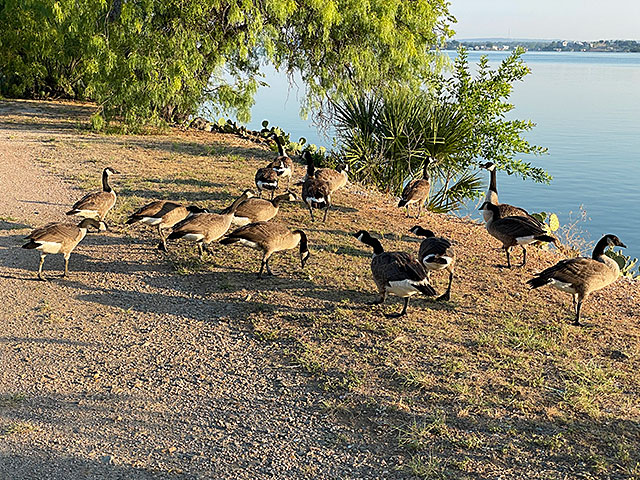 I counted sixteen of them, and they paid us almost no attention as we stopped to photograph them, and then continued on our way.

By the way, did you know that “gaggle” only applies to geese when they’re not flying; an airborne group in formation is referred to as a “skein” (although if it was up to this guy, every group of birds of any kind anywhere would be referred to as a flock; I’ll bet he’s a hoot at parties).

A few evenings ago, Debbie and I were in the living room, engaged in our usual post-prandial activity: an ongoing, earnest discussion of the existential implications of quantum mechanics…jk…we were watching Monk reruns.

Something caught my eye through the dining room window, and I immediately recognized it as one of the red-tail hawk clan that’s taken up residence in our neighborhood. 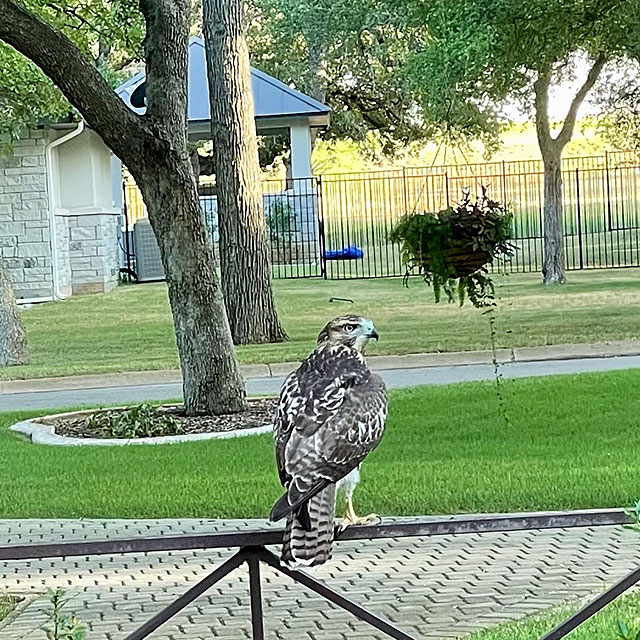 It posed for a few photos, then flew across the street where it landed in the neighbor’s yard. I managed to get a lucky action shot just as it took off. 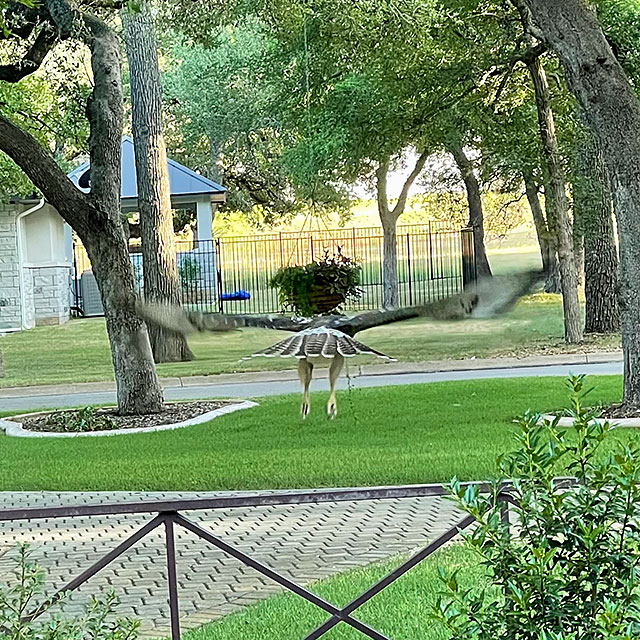 It appeared to be noshing on something in the grass, but I didn’t get a clear look. I will say that we’ve noticed fewer squirrels around the neighborhood lately (although “fewer” in this case just means “thousands” instead of “tens of thousands”…give or take).

And speaking of our across-the-street neighbors, on Wednesday evening I got a text from one of them.

As it turned out, that wasn’t completely accurate. Now, the reference was obviously to a skunk, and they frequently wander through our yards and the adjoining lots around dusk. But the one we’ve been seeing lately has an unusual color scheme. Well, let me show you what I mean.

Now, I did extensive research (aka, one Google search) on “skunks with brown tails” and after literally minutes of scrolling, found no evidence that anyone in human history has ever spotted one like this.

Seriously, though, I assume that this unusual coloring is sufficiently aposematic to warn off potential predators. The skunk’s body carries the traditional white stripes; it’s as if the tail was grafted on from another species. It’s simply another example of the wondrous variation in nature.