Hello again, and welcome to the 413th most obscure neighborhood of the Interwebz. Today is National Butter Day, National Baklava Day (not to be confused with National Balaclava Day, which is somewhat less tasty as well as not actually existing, at least not around here), and also National Homemade Bread Day. Are you sensing a trend here? And does it make you better understand how the universe does its best to balance things out, because it’s also National Take A Hike Day?

How many of you are old enough to remember how you wasted time before the scourge of social media swept the land? If you’re too young or too old to remember, there once was a phenomenon called “surfing the web” whereby we whiled away the hours, possibly in a Barnes & Noble coffee shop, following random links across the WWW. It was great fun, and sometimes accidentally informative. There were many fewer cat videos and popup windows, but many more dancing baby memes, blinking text, and garish background textures.

By the way, I’m going to use the phrase “back then” often enough that you might start gagging a bit, so I’ll shorten it to “BT.” M’kay?

BT, it was pretty easy for some of us to follow Alice down the rabbit hole and stumble across new voices and ideas, especially if one started with a favorite blog or two…because BT, bloggers linked to stuff like that. We don’t do that so much anymore.

I’m not sure why that is, but perhaps it’s the inevitable evolution of how we use the internet, and how it’s used by others. BT, if I wanted some insight on the latest tech coming out of Apple, I’d hop over to Jon Gruber’s Daring Fireball blog, because he was sure to be on top of it. Hot tip: Daring Fireball still is.

If I didn’t have anything specific in mind but simply wanted a jumping off place for exploration, BT Anil Dash’s blog was my go-to resource. BT, dashes.com/anil was a linkblog, basically consisting of nothing but, you know, links to other websites, sometimes without any context…roll the dice, click the link, and see what pops up. (Dash has now converted his site to a writer’s blog, with far fewer entries and far fewer links. But he weighed in on how the web changed, and not for the better, even back in 2012.)

Fortunately, some websites have changed cosmetically, but their purpose hasn’t. James Joyner’s Outside The Beltway (which is now a group blog) continues to offer insightful analyses of “politics and foreign affairs.” Instapundit, originally begun by law professor Glenn Reynolds, was arguably the most influential blog on the planet BT, and every blogger worth his/her/them/they/adnauseum’s salt coveted an “Instalanche,” the term coined for the 15 seconds of bloggerly fame created by a link from Instapundit. (Full disclosure: I got one once; it was real, and it was spectacular!) The website is still quite active, and is now a part of the blog conglomerate PJ Media, along with other A-list political bloggers and authors like Stephen Green (VodkaPundit) and Victor Davis Hansen. (More full disclosure: All of the political-oriented blogs I’ve mentioned skew to the conservative side of the fence. If that’s not to your taste, there are plenty left-leaning ones around; you can look for those on your own time.) (Even more full disclosure: I don’t read political blogs.)

Another daily read, BT, was James Lileks’s The Bleat, which is still regularly updated as a part of his all-encompassing website. Lileks is an author and columnist for the Minneapolis Star Tribune. He’s the ultimate arbiter of regrettable food and poor interior design choices.

All of the aforementioned blogs, with the exception of Daring Fireball, have turned into what I call “writers blogs” (as opposed to “linkers blogs”). All blogs may (should?) provide interesting links to their readers, but very few have that as their focus anymore. That’s neither good nor bad, but it does make web surfing harder.

So, BT was different that nowadays, and I tend to get nostalgic for BT. But that’s not to say that nowadays is completely lacking in worthwhile “personal websites” — like the one you’re reading, with the possible exception of the worthwhile adjective — where the authors give free rein to their creative juices and use the medium to share their victories, observations, aspirations, and challenges with whoever manages to find them.

I’m thinking of blogs like And then I woke up… where my virtual pal Beth holds forth on her real life (while her alter-ego as a successful novelist plays out on another site, to which I shall not link to preserve her privacy).

There’s What I’ve Learned So Far, written by Midland-based Berry Simpson, another pal, fellow cyclist and runner, and also a successful author. Berry’s jam is writing about the Christian faith and the way it intersects with and enhances his interests in life. He also shares some great ideas like this one, which I think I’m going to try myself at the end of this year.

How about one more? Jump over to Texas Trifles, presented in glorious old-timey sepia by Cowtown Pattie. Her blog went fallow for a long spell, but she’s back in the saddle, for good, I hope. She covers the waterfront prairie with insight and grace; she’s also waxing a bit nostalgic.

I realize that I’ve jumped around a bit, and the logic to this post is minimal at best, but surely you were clued in by the word “random” in the title.

And while it may not seem like it, I don’t really pine for BT. Every phase of life has its attractions, and the one I’m now entering has me focused on priorities other than “surfing the web.”

OTOH, have you seen this?! 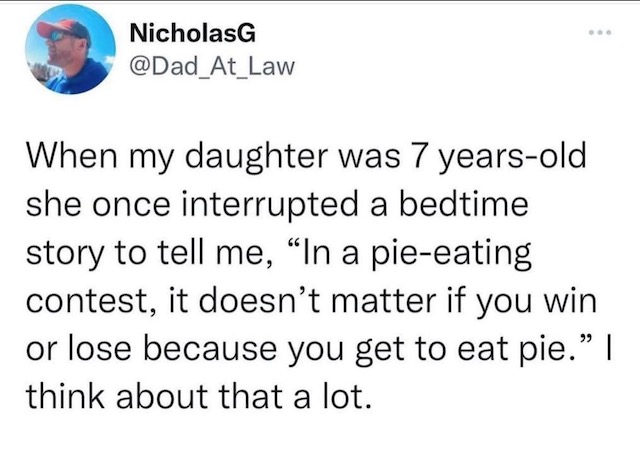