It’s cold and rainy and dreary…and I’ve decided that I’d be the world’s worst arsonist. 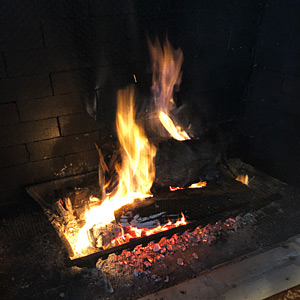 It might have taken hours to build, but it is cozy.

I did finally get a conflagration going in the fireplace, but it took an entire edition of the Wall Street Journal and most of my kindling to accomplish that. I don’t think it’s [entirely] my fault. For one thing, I’m pretty sure that if our house was built using lumber milled from our firewood, we’d get a homeowner’s policy discount from our insurance company. I’ve seen rebar catch fire more quickly than some of this oak firewood.

Not only is it fire-resistant, it’s also *&%&$ hard. Most of my firewood splitting experience came at the expense of nice soft pine in the mountains of Colorado, so I was taken completely aback when I took my first swing at one of these oak logs. They’re so hard — how hard are they?! — they’re used to split axeheads. [badda-boom] [Ed. — Please don’t do that anymore.]

Most of our daytime TV viewing time is split between HGTV and The Food Network (yeah, we’re old). One of the more interesting shows on the latter network is Beat Bobby Flay. The premise of the show is simple. Two chefs first go head-to-head in cooking a dish featuring an ingredient chosen by Flay. The winner of that mini-contest then matches up with Flay in preparing a dish of the winning chef’s choosing. Their two dishes are then sampled in a blind taste test by a panel of judges. I know; it sounds boring, but it’s not. Bobby Flay is not only a world-class chef, but he’s also a really good sport and a pretty funny guy. (And he doesn’t always win; someone with too much time on their hands has calculated that he has about a 70% success rate.) 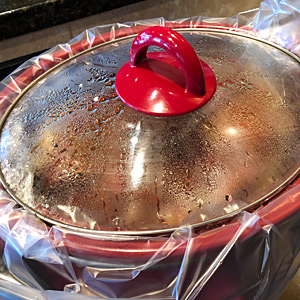 I bring this up as an introduction to something much more interesting: ropa vieja. This is a Cuban dish consisting of shredded beef simmered for hours in a salsa picante and traditionally served over rice and with tostones or maduros. The name is literally translated as “old clothes” and is perhaps called that because the dish began as a way of using leftovers. MLB makes it occasionally and, in fact, there’s a batch percolating in the crock pot as I write this, further proof that her time is employed much more productively than mine, if there was ever any doubt.

Where am I going with this? Excellent question, as always. So, yesterday afternoon, the dish chosen by the chef competing with Bobby Flay was ropa vieja — and it turned out to be one of the 30% or so episodes where Flay lost. While watching both chefs prepare their versions of the dish, we decided that having our own ropa vieja this weekend would be an excellent idea, especially considering that we didn’t mean me, except when it comes to eating said dish.

And, later on in the evening, we were teaching our weekly ESL class and during the break I mentioned to some of the students that MLB was cooking ropa vieja…and that elicited some confused laughs. Well, as it turns out, for future reference we won’t assume that Cuban dishes are well-known in Mexico and Guatemala. Also, some of our students tend to take things very literally. Also, we’ll probably be known henceforth as los maestros locos.

But, you really should try ropa vieja.

Alert Gazette readers will no doubt recall my previous reporting on the nagging notification capabilities of the Apple Watch. As it turns out, the watch’s notification nagging abilities are not limited to the detection (or possible detection) (or pseudo-detection) of tragic situations. Nope, that little wrist-mounted Jiminy Cricket also excels in pointing out the wearer’s shortcomings — and, to be fair, those occasional victories — in the area of physical exercise (aka “Activity”).

Apple has created some oh-so-sincere messages intended to motivate us to do better, although they don’t always come across that way. For example, at the end of a hectic day where one has endured all kinds of stressful endeavors short of doing any actual exercise, one can expect to see this pop up on the face of the watch: 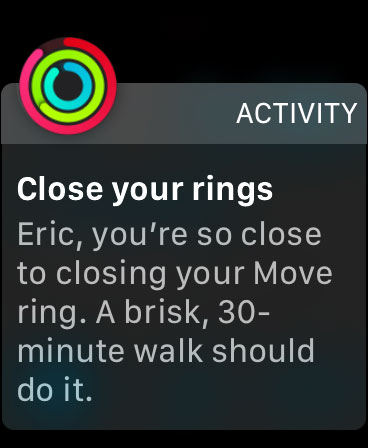 [For the blessedly uninitiated, those “rings” indicate how often you stood up during the day (blue), how much you exercised (green), and how much you moved around — measured by calories burned (red).]

A “brisk 30-minute walk” at 10:36 p.m. is not exactly my idea of motivation. And here’s what I think the watch is really saying to me: 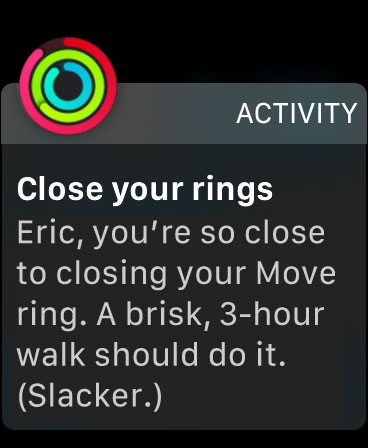 Of course, it’s not all “hiss of shame” on the watch. If you’re fortunate enough to “close a ring,” you get a congratulatory message: 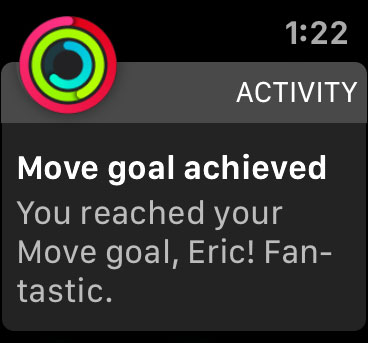 [Ignore the fact that I apparently haven’t stood up enough, despite all my exercise and calorie-burning.] So, this is good, but it doesn’t go far enough, or cover enough situations. Personally, I’d like to see Apple give me something like this every now and then: 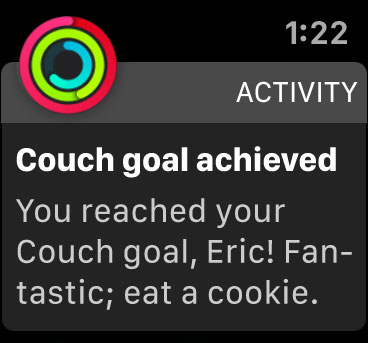 I’m pretty sure this kind of feedback would help increase Apple’s watch sales, as well as recognizing the value of a day like today. Now, if you’ll excuse me…my couch awaits.