I started to ask you to raise your hand if you went through the five stages of grief when you discovered the Gazette was offline and possibly deceased, but then I realized that the response would probably send me down the path of those five stages all over again.

You might think that in the week or so since the Great Missing Gazette Disaster began, I would have used the time to come up with some exceptionally pithy insights and pronouncements about cybercriminals, reliance on technology, the importance of citizen journalism, and the never-ending incompetence of the Dallas Cowboys. You’d be wrong about that. I’m still just winging it here, because I’m too old to change. (Actually, there will be some changes, but we’ll save that discussion for another time.)

Anyway, today is National Disc Jockey Day, the one day each year in which I remind the alert Gazette reader that your humble correspondent was once a radio DJ in the greater metropolitan area of Fort Stockton, Texas, served by media giant KFST-AM (“860 on your radio dial”), a station which many have been quoted as being “the best radio station in town.”

Speaking of Fort Stockton, when folks there aren’t transfixed by the goings-on here at the Gazette, they’re probably devouring the latest edition of the Pioneer, Pecos County’s newspaper of record.

Debbie and I continued to subscribe to the Pioneer for decades after we moved away. We stopped only after we determined that we basically no longer recognized any of names that showed up in its pages, the result of a combination of a changing demographic and our aging memories. But one of the features that we still miss was the recurring “Years Ago” column in which memorable items from earlier editions were reprinted.

These were short blurbs, and they were grouped by decade…ten years ago, twenty years ago, etc. all the way back to 100 years ago. Some great stuff showed up there. Besides the entertainment value, those clippings evoked a time of greater innocence, or, perhaps, just a reminder that life is comprised of small details that are designed to delight, puzzle, intrigue, or otherwise cause us to shift focus from the harder things of life. Plus, for a reporter, the stories involved had to be more fun than a local county commissioner’s campaign speech.

For example, this one…a simple account of a fishing trip…but one with a twist. 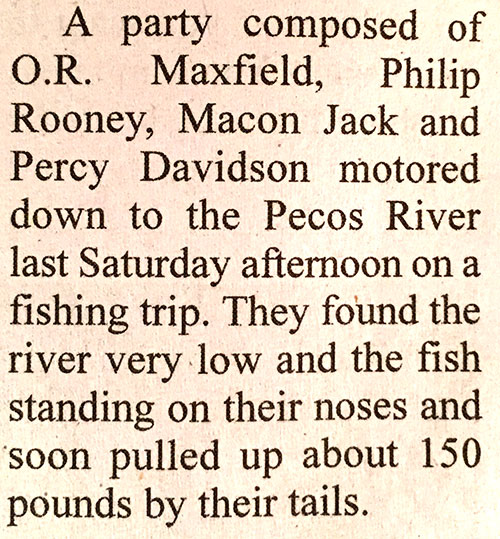 Setting aside the fact that there’s something fishy (sorry) about this tail tale, you just don’t get hard-hitting journalism like this from the Times or the Post. But, really, can fish stand on their noses? Are there any ichthyologists in the house?

Then there’s this, from more than a century ago. 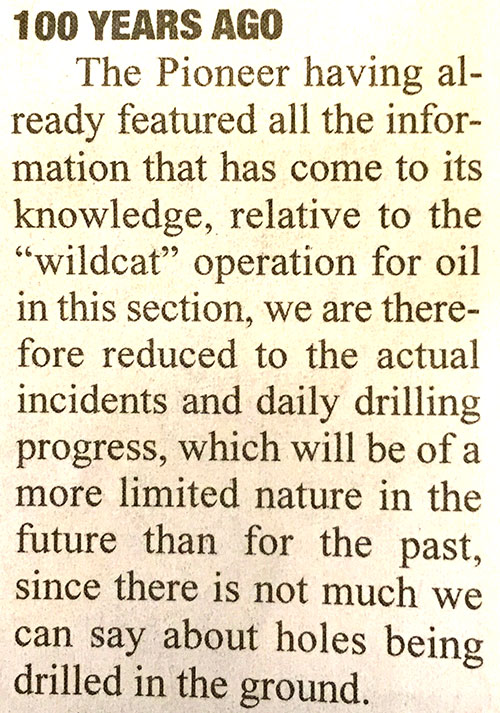 As an oil industry retiree, I find this announcement hilarious, even if somewhat accurate (even today, reading a daily drilling report is a sure cure for insomnia — unless it’s your personal well being drilled). I suspect that the “drilling progress” mentioned referred to the activity around the then-recently discovered Yates oilfield near Iraan (another Pecos County pueblo). It’s rather ironic that the Yates field would soon become the largest oilfield in the Lower 48 (it’s still producing today), and that Pecos County would eventually for years be the most prolific petroleum producing county in the United States. Point being that if the Pioneer’s editorialist could have seen into the future, he or she might have treated these seemingly mundane details with a bit more seriousness.

In closing, since I know you’re deeply invested in my life, let me quickly share why the past ten days or so have been a series of peaks and valleys that sometimes made me empathize more deeply with Job, and at other times with one of the lepers healed by Jesus (to continue the Biblical analogies).

And in the middle of all of that, I had the amazing experience of attending a Pink Martini concert in San Antonio.

I may share some more about some of these things later, but for now, I’m just happy to be infecting your web browser once again. I hope you are, as well, because your happiness is my everything. Peace out.

*Update: Uh, actually…it probably was. But I didn’t die, so still [Leper]